North Dallas Forty is one of the best sports films, and one of Nick Nolte‘s best roles.  It is based on the best selling book by Peter Gent, who spent several years as a receiver for the Dallas Cowboys.

Pro football in the 1970’s transitioned from being a sports business to being an entertainment business.  North Dallas Forty showed the corporate view of football along with the underbelly of drugs and the disposable nature of players as cattle. The football parties are scenes out of Caligula, with players fighting over and pawing women, throwing televisions into the swimming pool and open drug use.

The film could have had a working title of Sex, Drugs and Football, because that’s the world we see.

Nolte plays Phil Elliott, a Fred Biletnikoff  (Oakland Raiders) type receiver, not fast, but shifty, who runs good routes and has soft hands.  He’s been in a league enough years to know that his roster spot could go to a younger, faster, flashier receiver, who will also do what the management wants.

This was Nolte’s fourth film, soon after the Rich Man, Poor Man mini-series and his first big feature, The Deep. His star was ascending quickly.

The film opens showing Elliott waking up after a night game. His nose is bleeding and his body hurts.  He awkwardly gets out of bed and hobbles to the bathroom.  There are empty beer bottles from the night before and he smokes some grass, likely to relieve his pain.  As he touches a part of his body, you see scenes from last night’s game showing  vicious hits to different parts of his body. He also laments over a missed catch in the end zone, but the next play he makes a spectacular catch.

Elliott is a rebel, he sees through the B.S. and new world of computers and analytics to predict success.  Age is catching up with Elliott, who self medicates with booze and pills, and is having an affair with the fiancé (Joanne) of the team’s general manager, who already does not like Elliott. Joanne is in love with Elliott, but he can’t return the feeling.

The team owner tells Elliott, “There’s a place in the family for the right kind of man,” indicating that Elliott has some changing to do.  But Elliott can’t make himself into that. He then gets a lecture from the head coach about his immaturity. He’s not a team player. It doesn’t matter if he scores an occasional touchdown, he doesn’t commit himself to the system, and there’s immaturity in his attitude. He has to adjust to sitting on the bench.

Singer Mac Davis plays the quarterback, Seth Maxwell, Elliott’s best friend on the team.  They party together and self medicate.  They resist the head coach’s computer statistics mantra and his way of shaming and manipulating his players into getting with his program.  Maxwell only takes his rebelliousness so far, he won’t bet his starting job on it like Elliott will.  Maxwell is a good ole boy, like Don Meredith was as the Cowboy’s coach.  Behind Maxwell is a young stud quarterback, straight-laced and religious, which could have been a young Roger Staubach.

Head coach Strother is loosely modeled after Cowboys coach Tom Landry.  Stiff, and humorless, he motivates players and coaches by manipulation.  The general manager, Emmett Hunter (Dabney Coleman), is the team owner’s brother, and he would like to get rid of Elliott without having to pay his contract.  The owner, Conrad Hunter (Steve Forrest), views the team as only one asset in his large corporate empire. 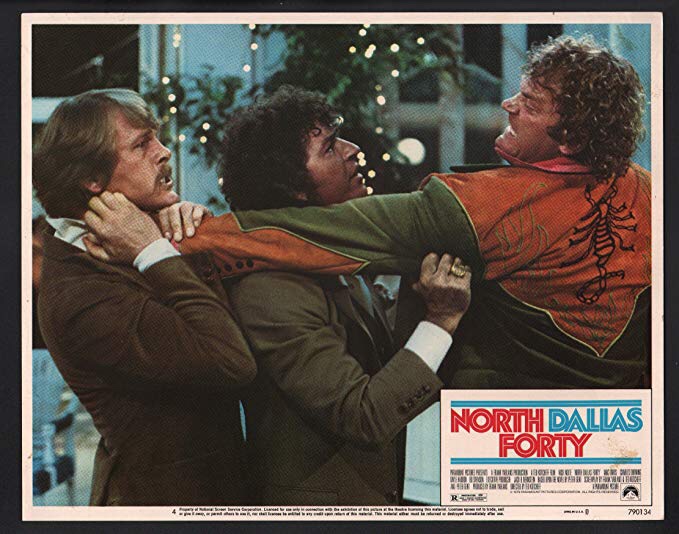 Gent’s book takes place a decade earlier and takes a much darker, more soap opera tone with some of the relationships at the end of the book.  The film, which had several writers including Gent, deals more with the party-tone of the 1970’s and has more satire than the book’s darkness.  Besides the football as business theme, most of the relationships in the film are sad and broken, with very little honesty.  On one level the film is about how people use each other to get what they want, and will give in, to keep the relationship going.   Even his friend Maxwell lets him down in the end, choosing his job over friendship.  Fortunately, Elliott does find someone who cares for him without football.

In the end, Elliott’s hand is played for him.  The team finds a way to get rid of him, after a private detective surveils him, completing a dossier of drugs and behavior that violates the morals clauses of his contract. The head coach won’t come to Elliott’s defense, even though Elliott scores touchdowns and plays hurt.  Elliott will not submit to their system, he won’t play their game.  At the end of the film it is clear that Maxwell still needs the game and will conform enough to keep his job, but Elliott has seen enough and it’s clear that he is ready to move on.

The film is co-written and directed by Ted Kotcheff (First Blood). He puts the camera right into the action, up close and personal. You hear and feel the hits and body crunches. The injuries seem real, just as the highs are high and the lows, crushing.

Kotcheff also captures the 1970’s excesses: from the parties to the drugs to the macho football player bravado. Elliott flies the edges of this hurricane as we look inside.  Elliott never commits to playing management’s game but he won’t give up the sport either.  He’s still a good football player but he doesn’t fit in that world any longer. After the physical and mental sacrifices he’s made, the pieces of his body left on every field in the league,  the game only wants more from him.  He realizes it is time to put away childish things.

This film is a winner.