This is one of the funniest films I’ve ever seen. Maybe the funniest.  It’s clever and the laughs come rapid-fire, like a screw-ball comedy of the 1930’s.

The film is about mistaken identity, and the pursuit by various parties for a bag.  The trouble is, there are four bags that look exactly like it, so confusion abounds.  This all takes place at a hotel in San Francisco, what is somehow left standing after the hilarity and chaos have ended.

Producer/director Peter Bogdanovich has the story idea, and gave it to writers David Newman & Robert Benton (Bonnie and Clyde, There Was a Crooked Man...) to create the script, and then Buck Henry (The Graduate, Catch-22) added much of the texture and humorous dialogue.  Bogdanovich’s last film was the classic, The Last Picture Show, so he was red-hot in Hollywood.  He was offered a film with Barbra Streisand, but he wanted to do a different kind of film, a screwball-type comedy.

Enter Barbra Streisand.  Streisand had starred in Funny Girl, Hello, Dolly!, On a Clear Day You Can See Forever, and The Owl and the Pussycat. Not all big hits but an Oscar win and very high profile films. The studio suggested Bogdanovich and he brought his idea, which she approved, and they brought in Buck Henry for the script.  Enter Ryan O’Neal.  He graduated from TV’s Peyton Place to Love Story.  Boom, he was in the big time.  Bogdanovich met with O’Neal and liked him, but told him that he’d have to play against type and be a rather square personality.

The four identical bags cause all kinds of confusion.  The first bag contains diamonds, the second underwear, the third prehistoric rocks, and the fourth top-secret papers.  O’Neal and fiancee Kahn (Howard and Eunice) check into the hotel for a musicologist convention.  He is the owner of one of the bags that contain his prehistoric rocks.  Judy (Streisand) is a sort of free-spirit who is a non-paying guest at the hotel who develops a big crush on Howard.  O’Neal plays Howard as a nerdy and aloof character, henpecked by Eunice, baffled by Judy’s interest, which causes him problems with Eunice, and problems in general.

Howard is in San Francisco in competition for a prestigious grant and he’s having trouble trying to impress Frederick Larrabee, the head (Pendelton) of the Larrabee Foundation which is giving the grant.  Howard’s main competition is Hugh Simon (Mars), a self-important jerk, who will do anything to discredit Howard.

There is a banquet for everyone at the musicologist convention.  Judy gets a hold of Eunice’s credentials and impersonates her, trying to gain favor with Howard, while greatly impressing Larrabee.  In the meantime, Eunice cannot get entrance to the dinner and tries to crash it, ultimately being dragged away.  Howard has the opportunity to set the record straight and vouch for the real Eunice, but he does not. 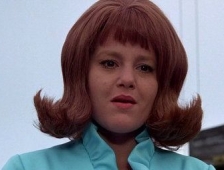 Madeline Kahn, in her first film, plays Eunice as a high maintenance, loud and grating woman who seems to need to run Howard’s life. Her performance is wildly over the top, perfect for this kind of film.  She would appear in other Bogdanovich films (Paper Moon, At Long Last Love) and gain great fame working with Mel Brooks (Blazing Saddles, Young Frankenstein, High Anxiety).

Howard finds Judy in his room, taking a bubble bath.  An incensed Eunice is knocking on the door demanding to come in, he pushes Judy, wrapped only in a towel, out the window onto the ledge. Pandemonium breaks out in his hotel room. Watch below.

The most famous and best scene in the film, is the chase, up and down the hills of San Francisco.  This scene, excellently choreographed and executed, took four weeks to shoot and is reminiscent of the keystone cops, with perfectly timed stunts and near misses with the train of vehicles racing along the hilly streets, alleys, steps, the winding street (Lombard Street), the pier, ending up in the bay.  Here is part of the entire sequence.

Streisand said she never knew what was going on because the script was so confusing with the bags, different characters stealing them, and then losing them to someone else.  Buck Henry said he used a chart as he was writing the film to keep track of the bags as they kept changing hands.  Somehow it all works.

Bogdanovich would not quite hit this mark again, although Paper Moon is an exquisite film.  What’s Up, Doc? is a near masterpiece.  Everyone involved would see their career arc extend upward because of this project.  On a $4M budget, the film grossed over $60M during its initial release.

Many critics loved it, others felt it was an imitation of better films like Bringing Up Baby. Rotten Tomatoes gave it a 90% critics score.

“The strength of a movie like this, of course, is that you don’t have to believe too much for too long, because there’s something else happening.” – Roger Ebert