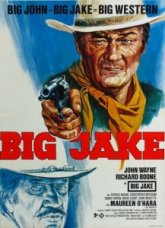 I remember when I first saw this film. It was a matinee at the Midland Theater in Coffeyville, KS. I was with a few neighborhood boys, the summer I was visiting grandparents. The Midland is an old one-screen theater like so many in small towns.

Going to a summer matinee as a kid was a treat. Whether the film was great or just something to fill the time, it’s those experiences of youth that we remember.

Watching the film I was struck by the harsher tone of the violence. John Wayne films were always violent, but this was not The War Wagon or El Dorado.  With True Grit, the violence was more realistic and bloody. These were the 1970s and The Wild Bunch changed everything. John Wayne films changed too.

The film was written by Harry Julian and R.M. Fink, writers of Dirty Harry (which Wayne turned down as too violent). The Finks would write Cahill, U.S. Marshall for Wayne, and Harry Julian Fink wrote many of the Have Gun – Will Travel episodes for Richard Boone.

Veteran George Sherman was the director of record, but Wayne mostly directed the film since Sherman was not in good health.  Wayne made sure Sherman received sole credit. Sherman began in movies during in the late 1920s with Mack Sennett and started directing films in the 1930s, churning out B-Westerns (the popular Three Mesquiteers quickie films for Republic), where he started working with a young John Wayne.  Big Jake was made by Wayne’s Batjac Productions and produced by son Michael Wayne, and released through National General Pictures, which was a distribution arm of a a large company of theaters.

Bruce Cabot played Jake’s old and tired friend Sam, who was supposed to be a Native American hunter. Cabot has been in many Wayne films, and Sam was a featured role. Cabot’s first film with Wayne was Angel and the Badman (1947). Cabot was a fine actor but Wayne’s films often employed Caucasians in Native American roles. This was one of Cabot’s last roles as he died the next year.

Richard Boone also had a featured role as leader of the kidnappers. After Have Gun-Will Travel, Boone focused on playing many villains. He also appeared in Wayne’s last film, The Shootist.  In Big Jake, Boone gives a meaty performance, he could have gone over the top, but as a professional, he knew how to texture the role, giving his bad man a lot of character.  Boone’s other big role was in Hombre, opposite Paul Newman as what else, the leader of the outlaws.

Big Jake was a collection of character actors and people close to Wayne.  Patrick Wayne co-starred as his son James, and Ethan Wayne, another son, played his grandson. Christopher Mitchum played Michael, another son.  Maureen O’Hara played Martha, his estranged wife, in their last film together.  Her role is not large, in fact, her and Wayne have only one scene together.  It is never explained why they are estranged, and the time period of his absence seems in conflict with what he says at various times during the film.  I would imagine changes were made to the script on the set and not checked for continuity.

Palmer, who made several films with Wayne, plays the big guy who kills with the machete. Wayne referred to him as “Grizzly.”  Palmer in real life was a very nice man and gentleman, but his towering hulk and shaggy appearance added to his menacing actions.  Palmer often took the machete prop with him to autograph shows because most fans mentioned that role to him. The man who killed John Wayne’s dog.  Palmer appeared in Wayne’s final film, The Shootist, in an uncredited role at the beginning of the film.  Wayne specifically asked for him for that part, and had to exert his star-power to make sure Palmer’s scene was given proper time and that he was paid accordingly, when the producers attempted to treat him like an extra.  At that point, Palmer had well over 100 television and screen appearances.

Big Jake is a favorite of many fans.  One of mine as well.  The gunfights and stunts are well done; but the fistfights are rather cheesy and more for comic relief.  Some of the scenes feel a bit improvised, maybe to add flavor or give a supporting character some camera time. These are minor complaints.  The weakness is the ending.  After all the carnage, Jake, his sons and grandson go smiling off into the night.  Jake’s friend Sam, was just brutally killed, along with Jake’s companion dog, hacked to death by the machete. The film just ends abruptly, to provide a manufactured high note.  Maybe better for the audience as they leave the theater, but it rings false.  I’ve read other comments from reviewers who mentioned this same issue.

After Butch Cassidy and the Sundance Kid, Westerns seemed to move to the end of the 1800s or the beginning of the new century, where the West was becoming modernized, where Native Americans were no longer a threat, and cowboys were a part of folklore. Even Boone took a television series, Hec Ramsey, about a Western lawman, much like his counterpart, Columbo (part of the NBC Mystery Movie Anthology series).

The film does a good job of setting up the story as an end of an era, a last hurrah for the kind of lawlessness that the film would depict.  The Texas Rangers drive new fangled automobiles that are quickly disabled and explode in flames.  There are new armaments like handguns with magazines in pistol grips and high-powered rifles with scopes.  As much as the West dissolves into modern society, it is old fashioned honor and justice that proves to be the saving grace.  John Wayne might be older, slower, grayer and wear reading glasses, but you don’t bet against him in a fight.  Not hardly.