Gosh, I never thought Elizabeth Taylor would be the subject of my blog.   I saw that Butterfield 8 was on TCM and I had a couple of hours to kill, so what the hell.

Taylor won an Academy Award for this bad girl role. I still don’t see how.  Butterfield 8 is a terrible film, and although she provided a stronger acting effort, she hardly gave the best performance of the year.  Maybe this level of suds is supposed to represent deep dish drama.  Melodrama maybe.

Yes, she has a certain believably in living a trashy lifestyle bedding every guy she’s attracted to. She has a married guy (Laurence Harvey) on the string who really cares for her, and she’s trying to change her ways but the film has a tragic ending for a fairytale not to be. That’s probably what got her the Oscar over Shirley MacLaine in The Apartment, Deborah Kerr in The Sundowners, Melina Mercouri in Never on Sunday and Greer Garson in Sunrise at Campobello.  Al incredibly talented actresses in strong films.  My bet would have been on MacLaine, who gave arguably her best film performance in a highly decorated film, The Apartment. 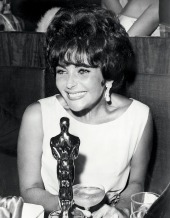 Butterfield 8 came right before Cleopatra. Taylor said she hated Butterfield 8 and the Oscar didn’t change her mind, but it freed her from MGM to make films with other studios.

Taylor was 28 years old in 1960 and beyond beautiful.  She would make a fortune from Cleopatra, in part because of production delays and contract perks.  She would also develop a reputation as difficult because of her health and demands.  She worked steadily so studios weren’t too scared of her.

Taylor had just finished a decade of quite good films and she deserved the success that came with these roles. Unfortunately, her private life was filled with front-page stories, and it got worse when Eddie Fisher entered the picture. It would continue when Richard Burton replaced Fisher, but publicity, good or bad, seemed to help at the box office and keep her highly paid.

Cleopatra isn’t really a film, it’s a spectacle. For the next twenty years she would indulge in many unusual and big budget misfires, some outright bombs, and a few films that fit her.

After watching Butterfield 8, I started thinking of some the films that followed.

The Sandpiper, Who’s Afraid of Virginia Wolff? and The Taming of the Shrew, all with Burton, made in 1965-1967, represent the high points. She would have to wait till 1980, for The Mirror Crack’d, for another quality role.

The Sandpiper – Taylor is described as a free-spirit painter, who is forced to enroll her son in a parochial school led by the married Burton’s character. They clash over their very different beliefs and engage in the eventual affair. A bit talky, but there is chemistry between their characters. The Big Sur location adds to atmosphere. Directed by Vincent Minnelli, this was toward the end of his career.

Who’s Afraid of Virginia Wolff? – A drunken orgy of insults and emasculation. Bring a date, stay for the floor-show! This is not the kind of film you watch unless you have an iron Constitution and enjoy being rapped on the knuckles with a sharp mouth by a harpy. Taylor is foul and mean; it’s not a pretty picture as she takes her madness out on her husband, Burton. All four main character are fabulous, and direction by Mike Nichols makes you feel every emotional punch. A great Taylor role, rewarded by a second Academy Award, this time well-deserved.  Taylor’s character was “frumpy” and made to be older and unattractive.  Her mouth, language and sexual desire were closer to Taylor than the outward appearance. 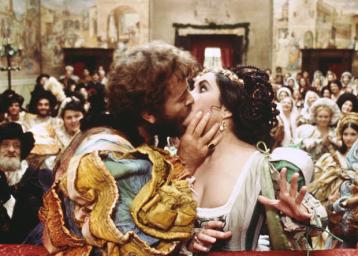 The Taming of the Shrew – Bawdy and fun, though if you don’t enjoy a verbal combat (although much safer than her previous film), stay away. Based on a William Shakespeare play, the basic story revolves around a nobleman courting an older and nasty woman, who is as strong-willed as he is. Great fun, and Taylor never looked better (even as Cleopatra). Directed by Franco Zeffirelli.  Taylor and Burton invested their own money in the film, believing they could take Shakespeare to the mass audience as Zeffirelli would do the next year with Romeo and Juliet. Of the films Taylor and Burton did together, this is the most fun.

The Mirror Crack’d – This film was a bit of a comeback for Taylor as the 1970s was not a great decade of film for her.  Directed with style and wit by Guy Hamilton, and with a fine cast, The Mirror Crack’d allowed Taylor to play off of her reputation. She was surrounded by Kim Novak, Rock Hudson, Tony Curtis, Edward Fox, Pierce Brosnan and Angela Lansbury as Miss Marple.  A murder mystery with a lot of humor.  The Novak and Taylor characters had an old rivalry and play off of their dislike for each other.  The film was not a big success in America dispite the source material and the cast.

This is just a slice of the life and career of Elizabeth Taylor.  She actually had enough lives for a library of books, which there are.  Her film career of the 1960s was a series of hits and misses. Even a commercial failure like Cleopatra was a must-see event for a multitude of reasons. Taylor had better, although less grand, films during the height of her career.

With Liz Taylor, from film to business to charities to her personal life, there was something for everyone.