In the late 1970s, Jackson Browne was a fixture on the radio. He was a product of the SoCal singer-songwriter generation, but his songs lent themselves to more band-friendly radio hits.

Running on Empty was a phenomenon, a rock album that bridges numerous formats. The album was so popular it was impossible to avoid. Honestly, after awhile I tried to, but I’ve come to appreciate its impact.

Browne’s career took awhile to gain traction. He was known in the songwriting community, he played with the Nitty Gritty Dirt Band, then went to New York where he was part of the new music underground, before returning to L.A., where he signed with David Geffen’s Asylum Records.  His songs were something special amongst other musicians and he had success as a songwriter before being recognized as a performer. Once he was signed to a recording contract, his real journey began. 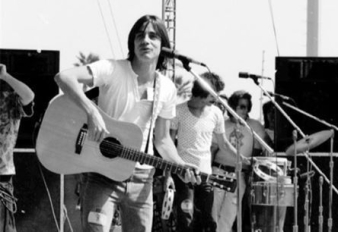 Jackson Browne, For Everyman, Late For the Sky and The Pretender all established Browne as a writer of thought-provoking and poinient songs. “Doctor My Eyes,” “Rock Me on the Water,” “Fountain of Sorrow” and Take It Easy,” co-written with the Eagles were all charting songs.

What helped set him apart from a crowded field of singer-songwriters was his ability to arrange songs with creative production and surround himself with the best session players.  These were personal songs but he had a means of making them commercial appealing to a wider audience. Even in his early 20s, he had a weariness much beyond his years, which might explain why other artists covered his songs. These Days, a song written in his youth tells the wisdom and reflection that often only comes after many hard miles.

Running On Empty was an anomaly, a live album, recorded on stage and in the road, of songs Browne had never recorded before. It was a live album that didn’t sound like the typical live recording. It was slickly produced but retained an honest in performance vibe.

Released in late 1977, it was a radio staple through the summer of 1978. Eventually, it would sell seven million copies, and peaked at number three on the Billboard chart.

Interestingly, Browne only write two of the songs by himself, “You Love the Thunder” and the title track, which peaked at number eleven on the chart.  The rest of the songs were co-written with others or covers that Browne adapted to the style of the recording.

The theme of Running on Empty was about life on the road, what is was like to travel in a band, the work behind the scenes by the roadcrew, and the grind that playing show after show across the country for the weary musician.

Most live albums were recorded of the band playing to an audience.  Running on Empty did that, as well as songs on the bus, backstage and in hotel rooms.  Browne’s band was made up of The Section, Danny Kortchmar, Russ Kunkle, Craig Doerge and Leland Sklar.  These guys were the creme d la creme of L.A. session players in the 1970s, backing Linda Ronstadt, James Taylor, Carole King, Crosby & Nash and many others.  The Section was the name of their side band.  Also rounding out the band was David Lindley, guitar player extraordinaire who added the notable slide guitar to many albums.  He and Browne would work together for many years.  Rosemary Butler, Joel Bernstein and Doug Haywood provided additional vocals.

From the album credits:

“The Load-Out”/”Stay” ended up being played by radio stations as a medley and turned out to be a chart hit.

Running on Empty was the peak of Browne’s career in terms of album sales and commercial accessibility.  His next album Hold Out arrived in the summer of 1980 to great anticipation.  It didn’t sell as well and the reviews were quite mixed, but it remains his only number one Billboard album.

The funny thing about success is you are expected to surpass your highwater mark every time out.  Hold Out had a slicker studio sound, using many of the same musicians from Running on Empty, but included a few faces from his past albums.  Browne shared production with Greg Ladanyi, who had engineered his past couple of albums and was a rising star in L.A. recording circles.

“Boulevard” and “That Girl Could Sing” were charting singles and are very good songs.  There are only seven songs on the album but four of them are over five minutes.  Browne captures the need for commercial singles with longer, story songs.

Hold Out arrived at the time rock music was changing.  The laid-back L.A. sound was being replaced by another wave of English bands and a leaner, rougher sound.  In the three years since Running on Empty, the Pretenders, the Clash, Blondie, Talking Heads and Devo all had big airplay.  The smooth L.A. story-songs did not disappear, but musical style was on the move.  Even Billy Joel, Linda Ronstadt and Paul McCartney retooled their sound for a tighter, new wavish vibe.

Jackson Brown’s maturity wasn’t just limited to his music, he was already cultivating his reputation as a peace and environmental advocate.  He was part of Musicians United for Safe Energy, protesting against nuclear energy and would become politically active against U.S. foreign policy in Central America, and participate in events for FarmAid and Amnesty International.

Looking out at the road rushing under my wheels
Looking back at the years gone by like so many summer fields
In sixty-five I was seventeen and running up one-on-one
I don’t know where I’m running now, I’m just running on

There is something in those lyrics common to many of us, reflective, thoughtful and a bit plaintive. Browne could touch the corners of our soul, all at once.

A remastered version of Running on Empty was released in July of this year.