When you open a time capsule from the 20th Century, among the item you’ll find is Frampton Comes Alive. Nothing says the 1970s like Peter Frampton.

Frampton is on his extensive “Finale – The Farewell Tour,” a mixture of nostalgia and celebration. The reason for the farewell tour is his inflammatory muscle disease called  Inclusion-Body Myositis (IBM) that will in time, more significantly impact his arms and legs, and eventually his fingers. Time is valuable, so he’s literally burning the candle at both ends. The past year he’s been recording and touring at breakneck speed.

“The reason I’m calling it the ‘farewell tour,’ again, is because I know that I will be at the top of my game for this tour and I will make it through this and people won’t be saying, ‘Oh you know, he can’t play as good.’ I can. But we just don’t know for how long,” Frampton told CBS Sunday Morning.

On this tour he stopped in Kansas City On August 5, for a beautiful evening under the stars at Starlight Theatre. 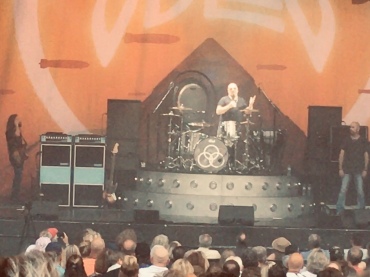 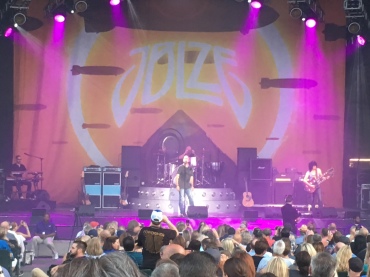 I used the “The Song Remains the Same” title in part because Jason Bonham’s Led Zeppelin Evening was the opening act, and Zeppelin had a song by that title. Bonham, whose drum style is so much like his dad, played 52 minutes of solid Zeppelin magic.  Bonham has been a number of bands including Foreigner, lead his own heavy metal band, and performed with Heart, Sammy Hagar, Paul Rogers, and played with the remaining members of Led Zeppelin for their reunion album, Celebration Day.

The opening act set the table for an evening of classic rock.

Frampton’s set wasn’t really a greatest hits collection, he’s done that in other recent concerts, nor was it a front to back playing of Frampton Comes Alive, he’s done that as well.  This tour is an anthology of his career, new and old, hits and deeper cuts, covers of classics.

He led off with “Baby (Somethin’s Happening),” one of the great songs to open a concert.  The energy was quickly dialed up and the groove set for the evening.  This song was the first cut on Frampton Comes Alive and was first featured on his 1974 album of the same name.

“Lying” came from Frampton’s 1986 album, Premonition.  This song got some airplay at the time, but not a big hit, as Frampton was trying to catch a wave in the 1980s.  On record, it has more of an 80s synth vibe, but in concerts it’s a more muscular guitar song.

“Lines On My Face,” another song from Frampton Comes Alive, is a mellower but incredibly strong guitar song, perfect for Frampton’s sustained picking style.  Personally, one of my all-time favorite Frampton songs.  Originally from Frampton’s Camel (1983), it was released as a non-charting single. 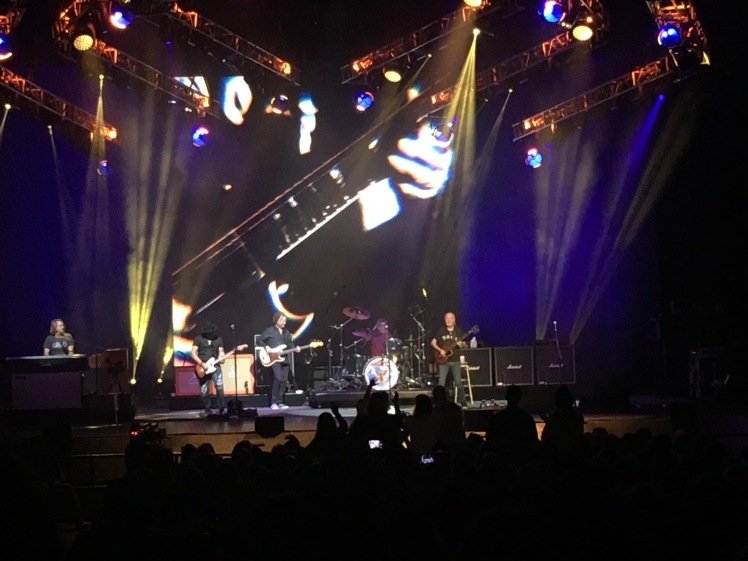 “Show Me the Way,” was a big hit from Frampton Comes Alive. An uptempo song, written at the beach in Nassau for his album Frampton, released in 1975.  In concert, it gets a rousing ovation and thunderous response from fans.

Going all the way back to Winds of Change, released in 1972, “The Lodger” was an unfamiliar one to me.  Frampton said he was mixing up the setlist since people had told him they were attending more than one concert, so this must be one added during the tour. 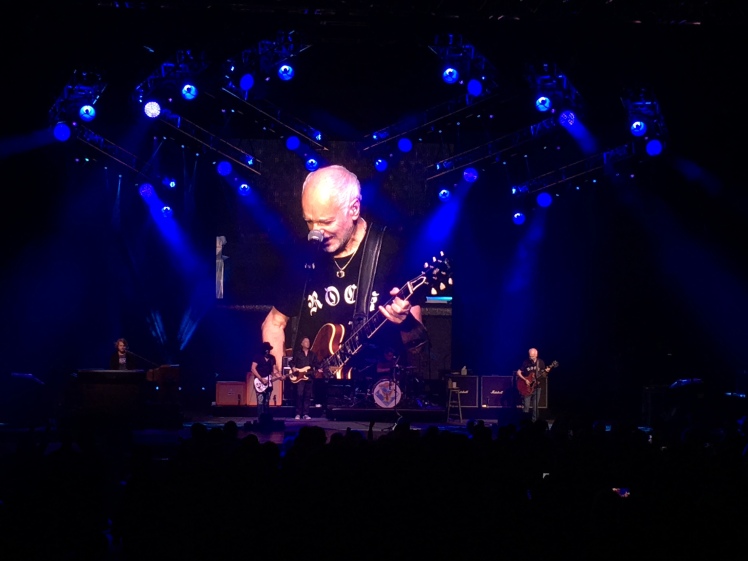 The next three songs were blues covers from his new album.  The audience was enthusiastic, especially for the soulful version of “Georgia,” a song most people associate with Ray Charles.  “Me and My Guitar” was a more uptempo song that Frampton crushed with his guitar.  “Same Old Blues” was much slower, allowing Frampton to unwinding his solos to let them breathe.  Frampton said that during his last tour, he took a 10 day break and recorded the album with his band.  He told a story of many tours with the Steve Miller Band, and because of Miller’s love for the blues, he would ask Frampton to sit in on several numbers.  Frampton felt a desire to visit the genre for an entire album. “When we formed Humble Pie, the first material we played together was just that,” Frampton posted on his website.

“Breaking All the Rules” came from the 1981 album of the same name.  A muscular guitar song, co-written with Keith Reid (Procol Harem), the song garnered airplay back in the day but wasn’t exactly a hit.  In concert, it was an opportunity for some great guitar work by Frampton and his bandmate Adam Lester.  Frampton has the ability to make an average song better, by adding the tricks and tones he’s played for 50 years.  He played a video made to promote the song in the background which seemed to confuse people not familiar with the song.

“Black Hole Sun” was done as a tribute to Chris Cornell and Soundgarden.  The song was featured on Frampton’s Grammy-winning instrumental album released in 2006.  Between songs, Frampton took the opportunity to tell stories and recognize influences in his life.  This was a blazing version of the song.

“(I’ll Give You) Money” another song featured on Frampton Comes Alive, originally came from Frampton (1974).  In concert, the song lengthened from four minute (original version) to five minutes (Frampton Comes Alive), to more than twice that length on this tour, with double lead guitar with guitarist Lester.  If you ever wondered if Frampton is still at the top of his game, wonder no more.

“Baby, I Love Your Way,” originally from the Frampton album, but not a hit until the live version from Frampton Comes Alive.  This is Frampton’s trademark song, and it sounded sweet in concert as thousands of fans sang along.

What can you say about “Do You Feel Like We Do”?  Originally from Frampton’s Camel (1973), it was a monster hit on Frampton Comes Alive.  Clocking in at more than 14 minutes, it still got a lot of airplay, considering the length and the talkbox expletive.  A concert favorite, Frampton has to play this song and he pulls no punches.  The audience ate it up, all 16 minutes of it.  This song perfectly closed out the set.

Frampton naturally came back for an encore, playing two other cover versions.  “Four Day Creep” and “I Don’t Need No Doctor.”  At some concerts he’s played “While My Guitar Gently Weeps,” a song he recorded for Now (2003). 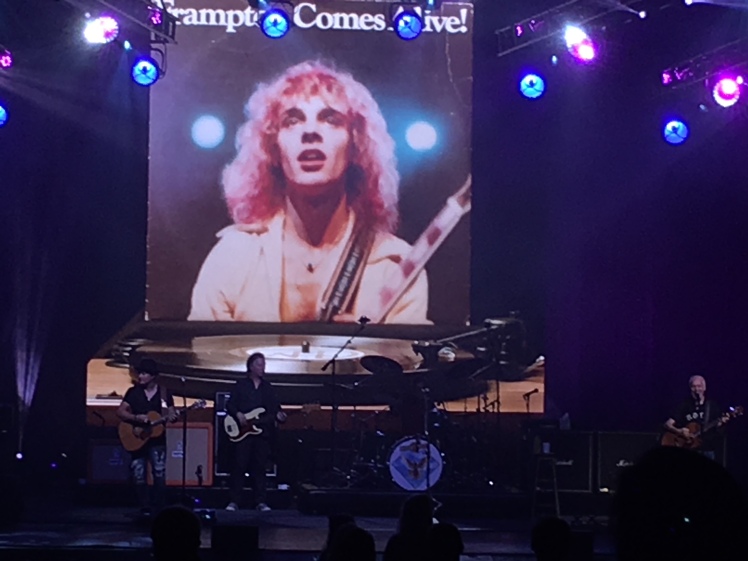 Frampton has been a familiar face on the concert seen in the past decade.  This is the third time I’ve seen him, including once where he played the entire Frampton Comes Alive, plus a greatest hits set.  He had the concert recorded and pressed to CD, available for fans after the concert!  And I got to meet him and get an autograph.  That, was my favorite Frampton concert.

His farewell concert was bittersweet. Realizing this would be the last time to see him in person made me sad.  It is the passing of an era, when many of us were young, and the world was different.  Frampton kept the nostalgia running during the concert with references to the past and photos from his life.  Even though he is bald on top and gray, his impish charm and light movement around the stage belies his age.  It is tough to think that the disease will drain away his flexibility and that incredible guitar talent.

Baby (Somethin’s Happening)
Lying
Lines on My Face
Show Me the Way
The Lodger
Georgia (On My Mind) ( Hoagy Carmichael cover)
Me and My Guitar (Freddie King cover)
Same Old Blues (Freddie King cover)
Breaking All The Rules
Black Hole Sun (Soundgarden cover)
(I’ll Give You) Money
Baby, I Love Your Way
Do You Feel Like We Do