The best album Supertramp ever made is not Breakfast in America.

Crazy, you say! Breakfast in America had more commercial play and sold many more units, but Even in the Quietest Moments is equally deep, less grandeur, and has their best song. However, it boils down to a matter of taste and preference. 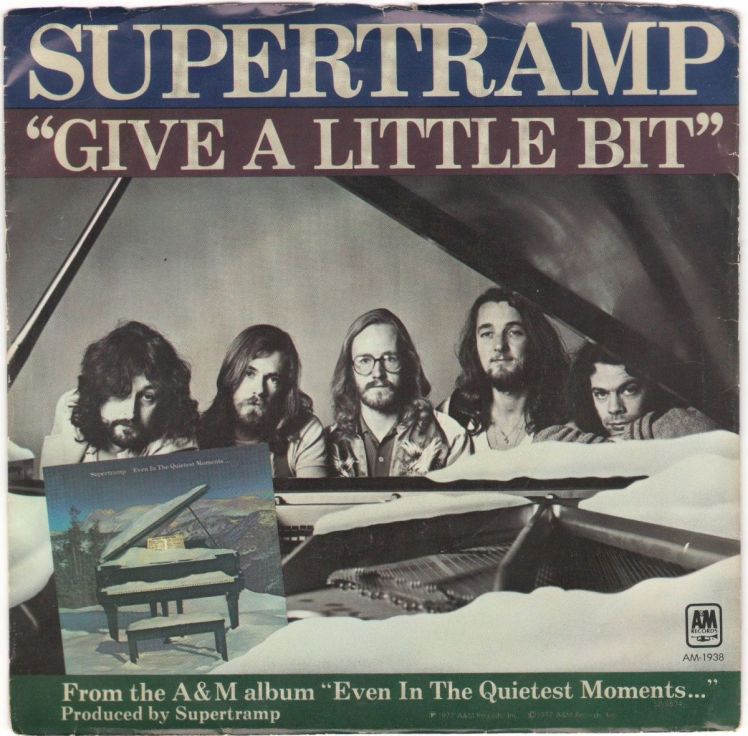 Even in the Quietest Moment was their first Gold Album in America. It is a mixture of ballads and big soaring, muscular songs. Supertramp, like Pink Floyd, Rocky Music and ELO, were lyrically ambitious, not settling for lyrics that failed to rival their soundscapes.

Give A Little Bit

Maybe the most recognizable song on the album, the opening 12-string guitar chords and the sing-along nature of the melody. This was the lead-off single, and probably the most played song from the album on classic rock stations.

A simple melody turned into a fuller arrangement. I underestimated the musical significance of this song at first. Another humble melody that undergoes orchestration and a resounding rock transformation.

Even in the Quietest Moments

Another song that begins with acoustic instruments, a quite lovely melody that heats up from a folkish beginning. This song would fit on Led Zeppelin III.

A melancholy piano and vocal, a love song, that doesn’t need any other instruments. A McCartney-type song that is beautiful in its simplicity.

The second single, and opening side two of the vinyl, a more traditional sounding Supertramp song, soaring and plaintive, with a big musical arrangement. This tune could have been on their earlier album, Crime of the Century. Sung by Roger Hodgson, this wistful songs rocks and a bit intense for the singles market.

Most of the songs on this album are piano dominated. They start soft, then shift gears to heavier instrumentation into a mid-tempo song, with lovely saxophone and guitar accents.

The album closes with a masterpiece.  “Fool’s Overture” is the kind of song the Beatles used to write, grand, sonic and bursting with imagery and ideals. Pink Floyd picked up the mantle from the Beatles to write songs that covered a lot of intellectual territory and dazzled you with musical suites within a song. If you listen to Neil Young’s work with Buffalo Springfield, particularly on “Broken Arrow” and “Expecting to Fly,” you see the majestic nature of his vision and historical landscapes. “Fool’s Overture” digs into English history like Young, a Canadian, embraces the American frontier.

“Fool’s Overture is one of my favorite pieces that I’ve ever written. It was very magical the way it came together. It was actually three separate pieces of music that I had for a few years and then, one day, they kind of all slotted together in what I think is a magnificent, kind of epic piece of music. I always imagined performing it with an orchestra, so when I did start playing with orchestras back in the ’90s, it was such a thrill to play this song. I still get goosebumps to his day every time I get an opportunity perform it with an orchestra.” ~Roger Hodgson

The song has words from Winston Churchill in the introduction, and William Blake in the middle.  The song is very much like “A Day in the Life” as it shift gears musically, and the orchestration drifts and in out. More than five minutes into the song, the vocals start. In eleven minutes, you will have traveled back in time, on a journey through English history, of courage and sacrifice, defeat and glory, of the human heart.

Too late, the prophets cry
The island’s sinking, let’s take to the sky
Called the man a fool
Stripped him of his pride
Everyone was laughing
Up until the day he died

Oh, though the wound went deep
Still he’s calling us out of our sleep
My friends, we’re not alone
He waits in silence to lead us all home

All of the albums’ songs are credited to Davies/Hodgson but it’s easy to tell who wrote what, without know who was the lead vocalist. Their writing style is so different.  Davies’ songs are quieter, personal, more often on this album about love and reflection. Hodgson paints with a bigger brush, his songs are more about the world and our interactions with it, and on this album, have a bit more muscle.  Together, the songs are a good balance of the human experience.  Davies plays keyboard, while Hodgson plays both keyboard and guitar.  This is not a big, heavy rock album with screaming guitars.  Hodgson’s guitar work serves a purpose in the arrangement but it is piano, organ and synthesizer that do the heavy lifting. But don’t forget John Anthony Helliwell’s sophisticated saxophone interludes.

Even in the Quietest Moments is a finely crafted album, which was common in the 1970s, a holdover from the Beatles studio work a decade earlier.   Like Lennon and McCartney, Davies and Hodgson built their songs from the melody, usually on a piano, into grander arrangements.  The exception here would be “Downstream.”

Breakfast in America gets more airplay 40 years later, but on my stereo, it’s Even in the Quietest Moments.