A lot of kids who grew their hair long, wore bell-bottoms and believed in peace, weren’t actually hippies.  The term was generic and unfortunate or not, it lumped a lot of young people into a group that widely ranged from gentle self-expressionists to political radicals.

The hippie era was technically a few years before me, but I swam in the backwash. Peace, love and understanding? You bet.

Here’s why I’m writing this: A lot of people identified as hippies grew into very productive members of society; some of those folks retained the attitudes and values of the time, while others shed them and adopted a more conservative way of life. In this country today, many similar issues and divisions exist that did 50 years ago. How people line up on those issues today is of cultural interest to me.

I worked with a guy in college, he was a few years older than me, he lived a decidedly hippie lifestyle, but there was something odd about him. He was attending law school.  As he prepared to graduate, he suddenly cut his hair and started dressing conservatively. Almost instantly, he seemed to change personalities. Someone said he was interviewing with law firms.  A few years later, I asked a friend about him and learned the guy was very successful, member of the chamber of commerce, lived in the nice part of the city and represented big corporations.  I looked him up and didn’t recognize him from the photo. What the hell happened to this guy?

A broader question, what happened to the counter-culture of the late 1960s that advocated make love, not war?  Those who went to San Francisco to The Haight, were the core of the movement, but not everyone who imbibed in the culture actually went there or to one of the bigger cities where enclaves were carved out, or to communes to grow crops and make soap.  Many believers stayed in their own communities, and lived uncomfortably as a bubble in middle class America.  Universities were natural landing spots for those who left the trappings of their conventional homes and gathered where education opened their minds, music flowed freely, drugs were available, and like-minded kids were found.

A lot of hippies grew up to make this country what it is today. Many of them lived the American Dream, and retired with healthy pensions and IRAs. Sounds very conforming.  Others, retained the lifestyle as best they could, while having a day job, and flying the freak flag on weekends. You see them today at protests and political rallies. You also see them volunteering for non-profit organizations, attending a place of worship and even running for political office.  Much of the long hair is gone. Much of the head hair is gone.

This was the generation that was going to change the world. Did they?

From “love-ins” and communes, peace and good vibes, health food and meditation, some of the lifestyle burnt-out when it met the real world, but other aspects worked and went mainstream.

Want to see a reformed hippie? Go to a concert for a classic rock and roll band.

Others who railed against the evils of capitalism and conservative-run government – they have become conservative themselves, want government to fine-tune financial markets, loosen banking and trading restrictions, and help pad their 401K.  Social welfare, forget about it.   From existentialism to the financial reports.  From make love not war, to keep the blue pills coming but protect my assets and trade markets overseas.

The song about “love one another right now,” well, now the tune is about making it on your own, and let others do so too.  These folks grew up and got serious, and made the world better by owning a chunk of  it.  No problem with being charitable, but this ain’t a socialist commune.  Get a job.  Imagine the Meathead, Archie Bunker’s son-in-law, wearing a three-piece suit, going to board meetings, a country club member and a Republican. Archie would be proud.

The Pew Research Center looked at these issues an published a report in 2018:

The Pew report also adds that, Increased racial and ethnic diversity of younger generational cohorts accounts for some of these generational differences in views of the two recent presidents.

James Tilley, a professor of politics at the University of Oxford, who studies voting trends said said of the age split:

“Whether this will continue or not depends on political circumstances and choices by the political parties, which are inherently unpredictable.”

Good point. It’s not just about traditional age splitting issues. There are new issues in the mix like the legalization of marijuana, LGBT rights, gun control and racial issues.

Here is an interesting news video about the changing views of some older Americans.

The video seems to buck the trend that a person may become more conservative with age.  These folks, many conservatives among them, are activitists out to do something about climate change.  These are not older hippies, although there may be a few, rather concerned citizens who want to leave an inhabitable planet for their grandkids and future generations.

So, as a person ages, how does this impact their views?  Are you more idealistic in your youth and you grow out of it?  If you believe in the concepts of loving your fellow man, justice and good will, how are those impacted by the events of life? I was not a Sunday School goer for very long, but it didn’t take a lifetime for me to understand kindness, respect and love toward others.  Aren’t those universal concepts, and not tied to a particular age group, or even a particular religion?

I believe that age does have an impact, but how it changes you depends on life experiences, the environment, choices of information (news, opinions), and the inner circle of friends and family.

If you were old enough to be against the war in Vietnam, do you feel the same way about intervention in the Middle East or Afghanistan?  If you supported racial equality in the 1960s, how do you feel about building the wall along the Southern border and the work of ICE? Do views on one issue forty years ago translate to a similar issue today?  In truth, it may be more complicated than that, but have your views changed about your relation to the world or how social justice is applied? 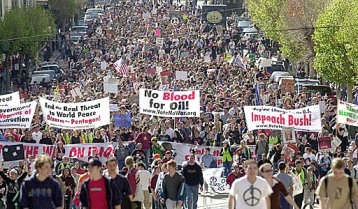 I’ll use myself as an example. I was against the war in Vietnam, and the invasion of Iraq, but supported the efforts in Afghanistan. Not all wars, or policing actions, are the same.  Without rehashing the Bush-era politics, Iraq and Afghanistan were completely unrelated, the evidence, the threat and logical totally different.  A thinking person can be against war, but support the need to defend the country’s safety.  Iraq was like Vietnam in that both were based on a false narrative and dishonest dialogue with the American people. The threat of terrorism was painted with the same brush as the fear of communism several decades earlier.  We didn’t learn much from Watergate.

Yesterday’s hippie, like most of us, probably sees him or herself as unchanged, but the world around them has changed.  Maybe they see the issues as more complex today, less black & white, and the issues having greater stakes.  Thinking back, maybe their parents weren’t as wrong as they thought.  The former hippie today has more to consider and more to protect, and the change they see happening isn’t all good.  Their generation was less diverse and while they knew racial equality was a good thing, and feminism was also good, maybe the pendulum has swung too far.  They might have been for gay rights, but not tearing apart the traditional family.  They were in favor of the Equal Rights Amendment, but the #MeToo movement is out of control for their comfort.  Maybe too much political correctness has diminished the rights of those to practice their religious convictions.  While supportive of civil rights, efforts like Black Lives Matter has handcuffed law enforcement,  and created more tension between Whites and people of color, in their opinion.  Government, which was not our friend before, still isn’t, because it has too many regulations and impinging on the rights of businesses and profits.  Too many social handouts drives up taxes and pushes jobs overseas.  The former hippie may be the business owner trying to stay competitive in the global economy, or got downsized before retirement as jobs went to Asia. Maybe, society has changed too much, says the reformed hippie.  True, but people also change.

How we feel about issues, for many, are very complicated, and we tend to reach for the

easy generalization.  I have family and friends who have gone from fairly liberal to moderate or conservative.  They all generally believe in fairness and social justice, but quickly raise concerns about what those issues really mean and define their degree of support.  There are as many ways to feel about an issue as color shades of the rainbow. [Sorry, I had to sneak that in.]

One thing is for sure, it is a different world.  Better in some ways, less so in others.  One more thing, as long as there is an issue, there will be people on opposite sides of it.  Not necessarily young verses old, or White verses color, English speaking verses non-English speaking, rich verses poor, white collar verses trades, straight verses LGBT, long hair verses short, or urban verses rural.  The world is different and the inhabitants more complex.

And by the way, the “Meathead” is now a vegan.