It’s Only Rock and Roll was the end of the Mick Taylor years of the Rolling Stones.  It is their last great guitar rock album.  The predominantly chunky-riff stuff that followed is not comparable to the Taylor-led guitar attack of the Stones classic period (1969-1974).

It’s Only Rock and Roll is a great album from song one to song ten.  The Stones were hitting on all cylinders. 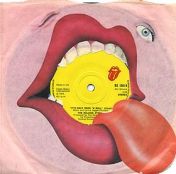 I recall finding this album at a used record store a couple of years after its release. Only familiar with the title track, I was bowled over by the music on this album. It had grit and muscle, and while it possessed no classic singles, I found the musicianship fascinating and mature. The band embraced their status in the rock pecking order but also loved the fact that they weren’t the squeaky clean Beatles. After Altamont and the drug-drenched sessions of Exile on Main Street, they needn’t have worried. From the cover painting to the lyrics of the opening song, these were your bad boys.

“If You Can’t Rock Me” is one of the best lead-off tracks to any album.  This song has superior guitar work.  It has the typical Richards’ riffing but has killer Taylor soloing and fills.  Charlie Watts and Bill Wyman drive the song with a strong groove.

“Ain’t Too Proud to Beg” was a Temptations song.  The Stones’ version is a good one, especially with Billy Preston on piano and clavinet, giving it that Motown groove.  I usually do not like the covers the Stones do, but this is acceptable because the musicianship is so good.

“It’s Only Rock and Roll” was co-written by Ron Wood but he received no credit for it.  The basic track was recorded at Wood’s house with mainly non-Stones playing on it, included David Bowie on background vocals.

“Till the Next Time” is a mid-tempo acoustic diddy.  The Stones got away from acoustic numbers, which is sad because Richards is a superior acoustic player, along with Taylor.  Nicky Hopkins contributes his awesome piano fills to go with the great slide guitar by Taylor.

“Time Waits For No One” arguably, one of the top five Stones songs and not even a single. Written by Jagger and Taylor, it was credited to Jagger/Richards.  Taylor would leave the band, in part of getting screwed over when he didn’t get credit for his musical contributions.  This song soars with more guitar muscle than perhaps any other Stones song.  The guitar solo at the back-end is the best Stones guitar solo – ever.  Nicky Hopkins chips in the arpeggios that help to build the power in this song.  Six minutes and thirty-nine seconds of mastery. Watts drives this song with his steady drum beat.

“Luxury” has a Richards’ riff running under the song. The song has pseudo reggae vibe.  The guitar work and faux reggae vocals give this a very different Stones sound.  The Hopkins piano is there too.

“Dance Sister Dance” also has a different time signature, a very fast beat, this song is in hyper-drive. Not a great song, but the Stones can take a slight idea and surround it with a great beat and sugarcoat it with superior guitar riffs and solo.  Richards can drive the song with his riff and let Taylor find the sweet spot.

“If You Really Want to Be My Friend”  Hopkins and Preston both play on this song, piano and organ respectively.  Blue Magic provide backing vocals, another Motown touch.  This is a slow, soulful song. Jagger shines on the vocals.  Taylor chips in with a great solo.  My only complaint is the song goes on for over six minutes, it could have been shorter and accomplished everything it needed.

“Short and Curlies” is a thumping, bluesy little number, with great slide guitar and piano courtesy of road manager Ian Stewart.  Great song, no.  But above filler.

“Fingerprint File” Mick Jagger came up with the guitar riff, a bluesy, driving number that allows the Stones to air it out a bit on an extended groove.  Jagger on guitar, Taylor on bass, Hopkins on piano, Wyman on synthesizer, and Preston on piano and clavinet. Instrumentally, the Stones could create some great grooves when they were interested.  This song ended an era.

This was the first album completely produced by Jagger/Richards.  They took some chances that they would have under previous producer Jimmy Miller.  They wouldn’t be this creative again for while.  The album reached the number one position on the charts but the single, “It’s Only Rock and Roll”, only rose to number 16.

To be fair, here are a few other opinions.

Rolling Stone magazine had this review:  The album has its playful moments but its most characteristic instant is Charlie Watts’s first drumbeat on “It’s Only Rock ‘n Roll.” It resonates like the sound of a shotgun. That violence — transmitted through the singing, words and music — makes It’s Only Rock ‘n Roll one of the most intriguing and mysterious, as well as the darkest, of all Rolling Stones records. Time has become just one more reality to face and to deal with.

Ultimate Classic Rock posted this about the album: Munich’s cold urban surroundings affected the new work-in-progress quite differently than the warm Jamaican vibes had Goats Head Soup. The city brought an added sense of urgency to “If You Can’t Rock Me” and “Dance Little Sister,” a palpable melancholy to “Till the Next Goodbye” and “If You Really Want to Be My Friend” and a convincing philosophical gravitas to “Time Waits for No One.”

Allmusic.com wrote: It’s uneven, but at times It’s Only Rock ‘n Roll catches fire. The songs and performances are stronger than those on Goats Head Soup; the tossed-off numbers sound effortless, not careless. Throughout, the Stones wear their title as the “World’s Greatest Rock & Roll Band” with a defiant smirk, which makes the bitter cynicism of “If You Can’t Rock Me” and the title track all the more striking, and the reggae experimentation of “Luxury,” the aching beauty of “Time Waits for No One,” and the agreeable filler of “Dance Little Sister” and “Short and Curlies” all the more enjoyable.