Klute is the kind of film that could be made today, but it would be ruined. Filmmakers had a very narrow window in 1971 to make daring but entertaining films. 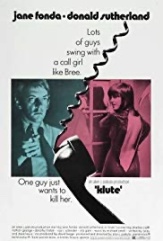 The more commercialization, the narrower the opportunity. Social mores were changing quickly in the 1970s. The subject matter, the nudity and the language of Klute was shocking, but it wasn’t presented for that purpose.  As films were freer to show nude bodies, present sexual subjects and no word was off-limits from being said, films lost the serious, dramatic and artistic narrative. Films became more exploitative, made money, but lost substance.

Today, a film like Klute, the subtleties would be turned into exaggeration, more shock and gratuitous imagery added, the result would be less art and more titillation. Films can pack more nudity, grander sexual topics and ramp up the editing and musical cues that drive today’s cinema.  If Klute was made today, it would be artificially scarier, more sexual and an extra dose of depravity. But not better.

In 1971, a domineering prostitute like Bree was tricky subject matter for a mainstream film. Also, telling it from a woman’s perspective, exploring her sexual freedom and control over men, that was different. Name one mainstream film of 1971 that featured a strong, psychological woman’s part like this?

Klute is fascinating on many levels. Producer/director Alan J. Pakula knew drama and how to maximize releasing threads of information to convey a story.  In the 1960s, Pakula was a producer of some of the most acclaimed dramas. His producing credits include: To Kill a Mockingbird, Baby the Rain Must Fall, Up the Down Staircase, Love With the Proper Stranger and The Stalking Moon.  For the next two decades, Pakula made some of the best American films.

Klute’s basic story is of a missing man, who supposedly sent dirty letters to Bree Daniels, a prostitute. The detective is hired to search for him, but the story goes sideways as someone else is following both Bree and the detective, and potentially threatening Bree. These two things are related. But how?

Klute is a detective story in addition to a story of sexual mystery. The frankness of the film was challenging and offensive to many.  The story had sexual liberation, kinkiness, drug use and psychological torment; something for everyone. The story travels where good people don’t go.

Bree is an interesting character.  In this story, we aren’t sure if the prostitute or the inhibited detective are the protagonist.  Who is being tested in the film?  The detective becomes Bree’s protector and the her lover. She doesn’t love him, but she begins to feel safe with him. Sex is how she relates to men. He crosses the line to save her, both from her profession and her drug use.

Bree is used to controlling her men, leading them around by their nose ring, as she says. It gives her some degree of dangerous control.  She really wants to be an actress, but she’s not the prettiest or the most talented, so she gets passed over.  But she fucks great. That’s her talent and her curse.

Two prostitute associates of Bree turn up dead.  Somehow this is connected to Bree. She has weekly appointments with her analyst, which she can’t affort because she has been trying to not be a prostitute.  In one of her sessions she admits to being perplexed by her emotions for Klute. Positive feelings for someone are new to her. The natural inclination is to want to destroy it, she tells her analyst. Living a normal life is strange and uncomfortable to her.

After Bree begins sleeping with the detective, her apartment is broken into and her things destroyed, as in anger.  She receives telephone calls, playing a recording of her voice, a conversation she had with someone else.  Psychologically, the screws are being tightened.

After the midpoint of the film, it is revealed that the man following them and making the calls, is the man who hired Klute.  If you are paying attention, that is not a big surprise.

This man follows Bree, and confronts her, in a factory when no one else is around. He confesses the murders to her, and how he framed the missing man. He plays a tape of him murdering one of Bree’s prostitute friends.  Pakula keeps the camera on Bree as the scene unfold.  From the tape, Bree hears the fear in her friend and the realization that she will be murdered, which you hear on the tape.  Bree is realizing that will be her fate too.  Jane Fonda’s Bree shows a range of emotions in this continuous scene, going from concern and uncertainty, to fear and realization of her impeding death.  Tears begin to stream down her face, running into an uncontrolable river, even as her nose starts running.  Her crying is quiet there is no sound, it is all done with her eyes and face. It’s an amazing performance. Fonda said, in an interview about the film, her motivation was seeing many bodies of women in the morgue who were killed by men.

The music is like a sound effect. Michael Small did the music, a spacey, industrial sound that lent an eeriness and ratcheted up the tension. Small scored many thrillers starting in the 1970s.  He scored The Stepford Wives, Marathon Man, Tha Parallex View, The Postman Always Rings Twice and many more.

Gordon Willis photographed the film, he embraced the dark part of the light spectrum, emphasizing the objects in the light. He got rich shades of color in contrast to the darkness.  Willis shot The Godfather, The Godfather II, Annie Hall, All the President’s Men, Manhattan, Presumed Innocent and many more.

Donald Sutherland played the sedate Klute. He and Fonda has chemistry on and off the screen. This was one of his first staring roles. Klute never really changed expression during the film. He was the straight-man to Bree, who tries to control him.  When she learns he has tapes of her phone calls, she tries to get them back by offering sex.  He declines.  They are opposites who attract but cannot fashion a lasting life together.

Fonda spent time with New York prostitutes to gain an understanding of woman who engaged in this work. She nearly backed out of the role before filming, unsure of her ability to give the performance what she felt it needed. Fonda described herself as a budding feminist and felt it was inconsistent with the role. She was told by a friend that she could go deep into the character, and that would be consistent with feminism.

The film was released in 1971, but it was many years later before I saw it.  This is obviously one of Pakula’s best films, though he would have many successes in his career.  He said that he rehearsed the actors for three weeks prior to the start of filming.  He and Willis planned out the shots and the atmosphere for each scene.  These two master technicians created one of the best films to look at, and a highly stylized film for the period.

Klute was part of what is known as Pakula’s paranoid trilogy: Klute, The Parallex View and All the President’s Men.  The main emotion in these three mysteries is paranoia. Fear or distrust of the government or of authority figures.

See the film and dig into Pakula’s career. You won’t be disappointed.