Chariots of Fire was a well-decorated film. Best Picture Oscar, plus three more Oscars including original screenplay.  Also, Golden Globe and British Best Film awards, plus a slew of other honors.  Producer David Puttnam had a hard time finding an American distributor for this English film, and even that came with some stipulations to broaden the appeal to the Yankee audience.

Chariots of Fire was very successful with awards, critics and the box office.  The film is based on real life characters, although some of it is fictionalized, the core of the events and their struggles are contained in what you see.

This was England after The Great War, when classism and religious intolerance were rulers of society and opportunity. The Olympic Games served as the dramatic spine, but it was really about discipline, faith and honor.

The film essentially follows two runners, Harold Abrahams and Eric Liddell, on different paths, running different races in life.  Abrahams enters Cambridge in 1919, where he must deal with the English class system and religious prejudice.  The other runner, Liddell, is in Scotland, where he is taking a break from his missionary work in China. His life is to serve God, but not everyone in his family believes that running serves God.  The film covers the time period leading up to the 1924 Olympic Games in Paris.  The last third of the film is reserved for the Paris Games, and the coda to the story.  As much running as there is in the film, that is only the backdrop to the human story that these two young man navigate over this four-year period.

Ben Cross starred as Abrahams and Ian Charleston as Liddell.  Abrahams is an English Jew, and Liddell is a Scottish Christian.  Being Jewish is not popular, and even though he is not a practicing Jew, Abrahams encounters various forms of racism.  Running is his defense against this racism.  Liddell believes that God made him to run and is devout in his religious practice.

In these times, sport is honorable and underlies English culture.  There was a nobility in amateur status, and definite expectations of gentlemen.  Abrahams runs into this more than Liddell, and he pushes back at the University Masters who expect him to tow the line.  Liddell’s struggle with his sister; he must convince her that his pursuit of running is not undercutting his mission to serve God.

Abrahams and Liddell are both sprinters, and in their first head to head battle, Liddell wins the race, leaving Abraham inconsolable. His girlfriend Sybil does not understand his grief.  Abrahams is befriended by Sam Mussabini, a successful athletic coach, who promises to improve Abraham’s performance.  Employing Mussabini borders on professionalism and makes trouble with the Masters.

Abrahams and Liddell train in their own fashion under his own coaching methods, driven by different goals, and each must deal with the impact in their relationships with those close to them, who struggle to understand the commitment and sacrifice.

The film is beautifully photographed by David Watkin and the production values are top rate in creating the world of a century ago. There is great attention to detail, costumes, automobiles, furnishings, etc. more importantly, the attitudes and desires, disappointments, politics and prejudices of the period.

Director Hugh Hudson finds the heart in the film, elevating running from physical exertion to the core drive of human desire. “The key to the film is emotion,” Hudson said during the film’s commentary.  “In our hearts, we believe we would stand up like the characters of Liddell and Abrahams.” 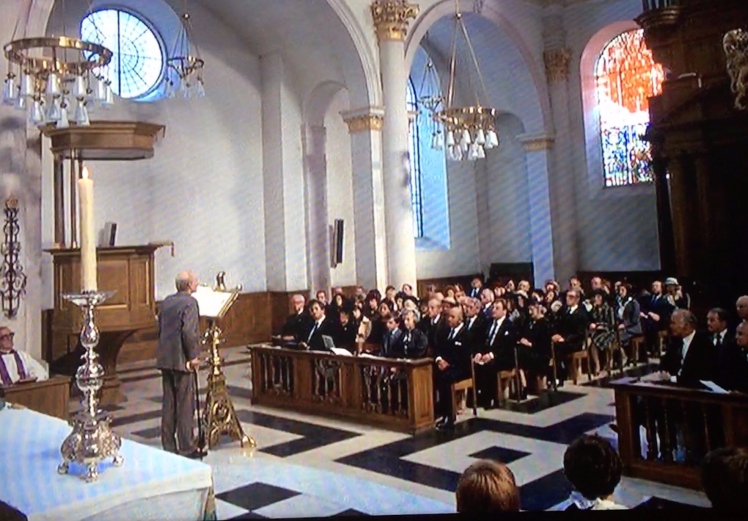 The film begins and ends in modern times (1978), at the memorial service for Harold Abrahams, with several of the runners in attendance, now as old men. This double flashback was intended to give the film perspective, a way for the modern audience to connect to this period piece.

Writer Colin Welland and Puttnam did their historical research, finding existing film of the runners. They were able to get actual letters written by one of the characters back to his family, scrapbooks of news articles of the time about races, and they sought out any of the characters and their families still alive. Liddell’s wife liked the final film, but said they didn’t correctly portray her husband’s running style. Actually, the only film that existed was of Liddell running, so that’s the historically accurate part of the film.

Every race in the film was planned by Hudson, what camera speed and placement. There is accentuation of the characters, more than just capturing who won the race. There is such passion and struggle shown in the slow motion camera work and editing. Abrahams’ Gold Medal victory in the 100 meters is shown in real time, and then a montage of images in slow motion.  This sequence is quite spectacular, and shows so much drama and emotion; is so much more than a ten second race.

Hudson never equaled the success, in a few short years, his feature directing career was winding down. His contemporaries like Alan Parker and the Scott brothers (Ridley and Tony), went on to long and successful directing careers.

Liddell discovers his event is scheduled on the Sabbath, and stubbornly refuses to run on that day.  He’s pressured into compromising, even asked by the Prince of Wales, to put King before God, but he won’t give in.  Another idea is put forth, to switch races with another English runner, and run on a different day, in the 400 meters.  Liddell agrees, but he endures criticism by those believing he would let his country down.  Even in pre-Internet days, words gets out and makes headlines around the world.  Liddell and Abrahams will no longer be in the same event.

Although the focus is on Abrahams and Liddell, Hudson shows glimpses of the other English runners having a mixture of success and defeat in their events.  He effectively selectively uses slow motion in a montage, with Vangelis music to capture the thrill of victory or the agony of defeat, to borrow a phrase from Wide World of Sports.

There is a subplot at the Olympics, the American runners Scholz and Paddock, who bring some attitude and star-power to the games.  These are the athletes that serve as the standard for the English runners.  They placed first and second at the 1920 Olympics.

In the end, the film is about the 1924 Games, but it is about much more than that. Abrahams must battle the racism of the university culture, and English society, but within himself.  He struggles to define who he is, on the outside and the inside.  Liddell must find the balance, and ultimately the connection, between his service to God and his talent as a runner.  This is a story about finding one’s self.

The film score. Much of the music in the film is period (Gilbert and Sullivan) and authentic to the events and emotions. For commercial reasons, Vangelis, the Greek composer was hired to compose and play themes used during the running events, race preparation, opening and closing titles. Sometimes brief cues, other times full songs, the music gave the film an ethereal quality. Vangelis’ father was a runner and understood the motivation of the characters.  Electronic music had been uses sporadically in television and film, but not like this.

When the Best Picture Award was announced, many were disappointed. The other nominees were Reds, Raiders of the Lost Ark, On Golden Pond and Atlantic City. The betting line had Reds as the favorite; it was a huge production with a grand, sweeping story.  That night, Warren Beatty had won the Award for Best Director. The opinion of many, Reds was a more deserving film. Was it? I might have been one of the few that felt Reds was pretentious and ponderous. Lawrence of Arabia, it wasn’t. Reds was a good film but overblown in praise.  Bigger films are not automatically better or more deserving of awards. Beatty deserves praise for delivering such a huge production and wearing so many hats (co-writer, proucer, director, lead actor). It was a very personal project for him and it was a compelling story. There were other films that could have been “Best” that were or were not nominated for that award.

Filming at the same time as Reds, both films were period pieces.  As Reds went past schedule, costumes and props weren’t available for Chariots of Fire.

Was Chariots of Fire best? It was well-done, compelling and artistic. Any one of the other nominated films would have been fine with me for any number of reasons. I wouldn’t apologize for it getting that Oscar. Watching it 38 years later, it’s still a winner.