The best Bob Seger studio album: Night Moves or Stranger in Town?  Some of you might be thinking, Against the Wind (1980).  That’s a fine album too with several charting singles.  Some folks mention Live Bullet, the album released right before Night Moves and that stayed on the charts during the success of Night Moves, to make 1976, a big year for Seger.  For this face-off, we’re focusing on studio albums. 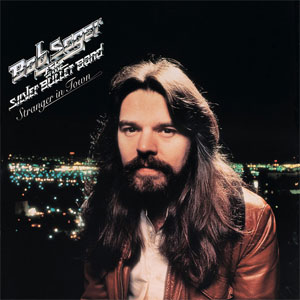 In the late 1960s, Bob Seger began his long recording career.  He recorded a number of albums before he hit on his successful formula with Night Moves (1976).  Two years later, he returned with Stranger in Town.  Both of these albums seem to top the various lists of best Bob Seger albums.  So which is it?

Let’s look at each, and I’ll give you the definitive answer to the question that is rocking our civilization.

Both of these albums featured Seger’s Silver Bullet Band, and the Muscle Shoals Rhythm Section, on different songs.  Both albums are augmented by a number of musicians and singers.

“I guess I was real inspired by the way they wrote, so a lot of our hits ended up being very narrative. There’s a lot of stuff that we do that is pure energy, too, but those weren’t the hits.” – Seger said of the singer/songwriters of the early 1970s.

Seger developed a formula that seemed to capture the warmth of his live performances, as if you were sitting in a small club, with a smooth production that didn’t over polish his sound.  From Detroit, he never lost his rock n roll spirit and embraced an old-time rock n roll appreciation, coupled with an R&B vibe from the city of Motown.  Working with the Muscle Shoals Rhythm Section not only brought the professional musicianship of these accomplished players, but the soul of their years of playing with amazing artists.  Seger was good at incorporating different musical influences into his own rock roots.  Over the next several decades you would see him adapt, to country or the slick 1980s production, although that was not his finest moment.

Seger had an immediacy with working class America, like Bruce Springsteen or John Mellencamp.  After Night Moves, Seger was finally known outside of the Midwest.  He said he actually got mobbed in Buffalo, it had never happened before out of Detroit.

All tracks are written by Bob Seger, except where noted. 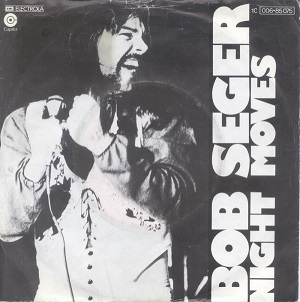 The album reached number eight on the charts and sold six million copies.

“I was a stranger to all of this: success, fame, money,” he said in 1979. “I was so afraid that it was going to stop at any minute. I was afraid that I had just gotten lucky.” – Bob Seger to Loudersound.

All songs written by Bob Seger except where indicated.  This album has a more polished production value.

Both quality albums, but there is a difference between them. With Night Moves, Seger turned the corner in his songwriting and performing.  Stranger in Town showed him as a mainstream commercial artist.  Night Moves is a bit rougher in style, his songs a bit less calculated, and a more relaxed vibe.  With two mega-selling albums, Seger wasn’t going to sneak up on anyone, and the expectations were bigger.

Night Moves is my favorite of the two.  It is of a period when I remember his songs on the radio, a relatively new presence.  It was a pure, rock sound, a timeless sound.