Steve Miller enjoyed back to back platinum years in 1976 and 1977.  To be accurate, this was the Steve Miller Band. They had already served up a big album, The Joker, in 1973, platinum in fact, and it reached number two on Billboard.  The title song was a number one hit.  Guess what?  He would produce two even stronger albums, back to back.

Three years later, Fly Like an Eagle was released.  It would be one notch below The Joker on the chart, but would sell more than four million copies.

His Greatest Hits 1974-1978 were essentially these two albums. Imagine that.

Fly Like an Eagle was solid, from beginning to end. The Joker was very good, but it was uneven. I wouldn’t say filler, but it wasn’t all platinum, or gold. You did get an easy going vibe, pleasant and some fine playing. Fly Like an Eagle is Fleetwood Mac, Eagles and Doobie Brothers sales territory. The major leagues. 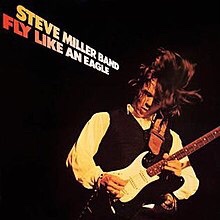 “Fly Like An Eagle” Miller 4:42  A seriously bluesy beat, with organ and guitar.  Definitely a classic.

“Wild Mountain Honey” Steve McCarty 4:51  A shimmering song with guitars and synthesizer.  Miller harmonizes with himself.

“Take the Money and Run” Miller 2:50  A popular single, guitars everywhere, in this story song.

“Rock’n Me” Miller 3:05  A rocking beat, this song wears out the bass and guitar as it moves along.

“You Send Me” Sam Cooke 2:42  Totally Millerized for this album, nice finger-picking guitar work, and fine vocal work.  Not sure why he chose to include this, but a decent version.

“The Window” Miller, Joseph Cooper 4:19  A slow, bluesy song, the kind Miller does really well.  He adds enough melodic touches to win pop audiences over with the blues.

Steve Miller is a very good guitar player who doesn’t solo much. His strength is punchy rhythm grooves that create these offbeat song styles. The Doobie Brothers had these similar rhythm guitar chords that powered their songs. It wasn’t about the solo, it was the rhythm textures that gave the songs such an interesting and unusual time signature. Steve Miller wasn’t obvious about his own playing, in fact, he used a variety of guitar players.

Book of Dreams reached number two on Billboard and sold three million copies. It followed closely after Fly Like an Eagle, in part because most of the songs were leftover from the previous album.  “Leftovers” is a bad term, it implies they weren’t good enough.  They were holdovers, not used on the previous album.

“Jet Airliner” Paul Pena   4:25  The album starts with a classic, an upbeat guitar pounding piece of pop/rock. Good time music.  Reached number eight on the chart.  It was reworked a bit from the Pena original with some tasty guitar licks.

“Winter Time” Miller   3:10  More spacey synthesizer to start the song, a bit like Styx (“Crystal Ball”).  A nice piece of focal work over a haunting guitar.

“Swingtown” Miller, Chris McCarty   3:54  Kicking it up a couple of notches, a pulsating guitar beat moves this song along.  A nice groove single, good times, it reached number 17.

“True Fine Love” Miller   3:10  An old time rock song, it would have fit well on one of his earlier albums.

“Electro Lux Imbroglio” Miller  0:55  Time for another synthesizer interlude.  Okay, but not as good as the others.

“The Stake” David Denny  3:56  If you think this sounds a bit like the chugging guitar pulse of James Gang, I agree.  A strong beat and guitars that follow the rhythm, it’s a bluesy-rock song.

Both of these albums are similar, but Fly Like an Eagle is a bit earthier and sounds closer in style to The Joker. Book of Dreams has a slicker finish, even the bluesy songs. If these were the holdovers, he saved some good ones.

Put the two albums together, toss out a couple of the weaker ones and you have an entire CD of great rocking songs. No joke-er.