The band, not the delicious fruit salad. Formed in 1970, most of the original band still performs today.

Ambrosia is one of my favorite bands from the 1970s, they are also one of the most eclectic. In the space of seven years, their music changed from prog-rock to laidback L.A. pop to more of a rock and roll style. Every other album was a major style shift. Incredibly, they did them all well, before the bottom dropped out of their fame.

It’s difficult to talk about their first album Ambrosia (1975) without linking their next four albums.

Ambrosia has two minor hit singles, “Holdin’ Onto Yesterday” and “Nice Nice Very Nice.” Both were quirky, difficult to describe songs, but musically very bold. They would fit in the art-rock category of Emerson, Lake and Palmer or Yes.

There is a muscular, powerful rock vibe to these songs with the organ and guitar work. Ambrosia, even when it rocked-out, had two very soulful and smooth lead singers, which gave them a commercial and distinctive sound.

This debut promised a lot. At the midway point in the decade, music was headed in many directions.

In 1976, Ambrosia returned with Somewhere I’ve Never Travelled, this time produced by Alan Parsons (Beatles, Pink Floyd, Alan Parsons Project). Parsons brought his studio wizardry to the album, big production and layers of sound. Listen to this album and I, Robot by APP, and they are cousins.

From start to finish, I like this album better than their debut, but it lack the unique-sounding singles. The album feels more grown up than its predecessor, thanks in large part to Parsons and the growth of the band in the studio. It is hard to deny the charm of “Can’t Let a Woman,” a song with great intensity and a soaring arrangement. This album is less art-rock and more prog-rock, but they keep the songs at medium length.

After this album, the band was signed to a new label and their keyboard player left. Their sound also changed. The band also went back to their original producer. The band did not lose their musical chops, it just shifted to more of a jazz-rock, smooth and polished. They shed the demon for tailored silk suits.

Life Beyond L.A. arrived in 1978, and with it, Ambrosia upped the ante. It would be big seller and real number 19 on the charts, their highest charting album to date.  “If Heaven Could Find Her” and “Life Beyond L.A.” were moderate hits, uptempo and pleasing, but with no real rock edge to them.  The breakthrough single was “How Much I Feel” which shot up to number three on the Billboard chart.  This is the song that most bands dream of having.  It was grand, romantic and played on nearly all radio formats.  I loved the song then, and still do.  Thankfully, the arrangement keeps it from sounding like Barry Manilow.  The band toured on this album for two years.  The album had that L.A. silky, laidback sound.  The soft groove with just enough soul made you wonder if Michael McDonald was going to pop up on harmony vocals.

How do you top this?

Enter One-Eighty (1980) and you have an album that is equal to Life Beyond L.A., certainly in style and sales, and it two high charting singles, “Biggest Part of Me” and “You’re the Only Woman,” both in the top fifteen.  These were smooth, easy soft-rock songs that played on both AM and FM radio.  If you were at the disco, these songs provided a slow dance opportunity.  The rest of the album has moments of rock, but a smoother variety, Doobie Brothers or Steely Dan, nothing threatening, just sophisticated and polished.

Ambrosia had quiet a different sound than just three years ago.  Keyboard player Christopher North returned to full-time duty as well as a second keyboard player. 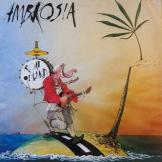 In 1982, their last studio album, Road Island, changed the sound yet again.  The band toughened their sound with more of a rock edge.  It is not a bad album by any means but it lacks the commercial gloss of their recent albums.  A new producer is onboard, James Guthrie (Pink Floyd, Roger Waters, Kate Bush).  Main songwriter Pack steps back somewhat, and he would leave the band after the album was released.