Elton’s first album since the dreadful Victim of Love of the prior year.  21 at 33 is one of my least played albums, I like a couple of songs, and that’s it.  Why review it then?  This album is a key in Elton’s journey back, although, there were more stumbling blocks ahead.

This was the 21st album, and Elton was 33 years old.  Creative title writing.  The album reached number 13 on Billboard and sold enough for Gold status, but that is quite a reduction from his sales of a decade earlier.  The success of “Little Jeannie” helped lift this very average album to be a minor success. 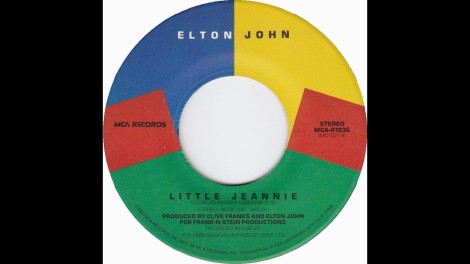 Once again, Elton and Clive Franks were producing and the album was recorded in France and Los Angeles over a period of about eight months.  Looking at the credits, there are lots and lots of players and singers.  The songs feel like a patchwork of effort.  These sessions would produce material included in Elton’s next album, The Fox.

“Chasing the Crown” (Elton John, Bernie Taupin) 5:36  The song starts with blazing guitars and pounding piano.  The song takes us back to his harder rocking pop hits of the 1970s, it has familiar riffs and feel.  It’s not bad, it just sounds generic.  That’s a high point here.

“Little Jeannie” (John, Gary Osborne)  5:14  Elton’s biggest hit in quite awhile, number three on the pop chart and number one on the Adult Contemporary Chart.  I’ve never really liked this song.  It is pleasant and has a nice chorus, but it’s painting by the numbers for Elton.  At over five minutes, the length is unnecessary.

“Sartorial Eloquence” (John, Tom Robinson) 4:45  One of the nicer songs, a mid-tempo rocker with a lilting chorus.  Released as a single, a minor hit.  You hear some of the old Elton in this song.

“Two Rooms at the End of the World” (John, Taupin)  5:40  Another gritty guitar song, Steve Lukather (Toto) grinds it out.  One of the better songs on the album.

“White Lady White Powder” (John, Taupin)    4:34  A song about cocaine. Really?  A reasonably nice melody, it could have been a much better song.

“Dear God” (John, Osborne) 3:47  The arrangement tries to lift this song, and while the music is okay, there is nothing special about this song.  A gospel type song, it fails to convince me to want to hear it again.

“Take Me Back” (John, Osborne) 3:52  A countryfied ballad, nothing special to see here.

“Give Me the Love” (John, Judie Tzuke) 5:30  Credit David Foster and James Newton Howard for the success of this song.  Their orchestral and choral arrangements and playing (Newton on piano) brought out a stellar musical statement, which elevated it from the rest of the album.  I have always like this song, but I can understand why some critics thought it was sentimental sludge.  The subtleties in the arrangement mined some underlying vocal and musical fine points.

Rolling Stone panned the album; I like it just a little bit better than they did.  The album is better than some of the dreck you’ll find at the end of the decade.