Pieced together from older songs and a few new ones, this album was one of Elton’s worst selling albums ever in the U.S., it did not even sell enough to be a Gold album. 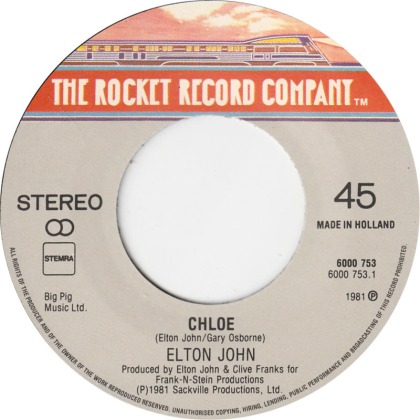 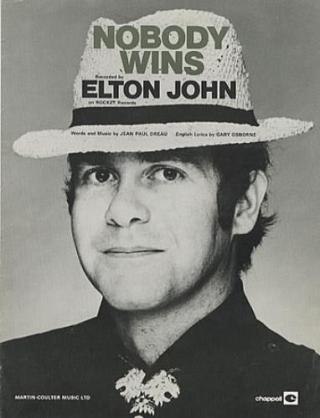 The older songs were produced by Elton and Clive Franks and the newer ones by Chris Thomas.

The reviews were generally not kind to this album.

“Heart in the Right Place” (John, Osborne) – 5:15*  A bluesy number with fine guitar work, but the song does not go anywhere.  You want to like it, but it gives you very little that is interesting.

“Just Like Belgium” (John, Bernie Taupin)– 4:10  Supposedly written for Rod Stewart.  A new wave type song, I can imagine Elvis Costello singing this but with a different style. Not a bad song.

“Nobody Wins” (Jean-Paul Dreau, Osborne) – 3:40  New words to an existing song.  It has a heavy, synthesized groove. One of the better sons on the album, certainly the best song on side one.

“Fascist Faces” (John, Taupin) – 5:12  The arrangement reminds me of Billy Joel. Heavy guitar and wall of sound with the reverb drums.  Big production with choir.  Nothing subtle about this song.

The first three tracks are segued into a suite of songs.  These songs are some of the best music written by Elton.  If for no other reason, these songs should be listened to and enjoyed.  I am reminded of the opening instrumental suite on Goodbye Yellow Brick Road, grand and sweeping with emotion.  This trio of songs are very downbeat and poignant, a much different vibe.

“Carla/Etude” (John) – 4:46*  A lovely song on piano with strings in the background arranged by Howard, who does a wonderful job.  It is easy to understand why he moved on to be very successful in film scores.  The second part of the song was supposedly written for Clive Frank’s new wife.

“Fanfare” (John, James Newton Howard) – 1:26*  This song picks up as a segue from “Carla/Etude” and you hear similarities, but the tone here is a bid more melancholy.  Nice arrangement by Howard.

“Chloe” (John, Osborne) – 4:40*  “Fanfare” blends into “Chloe” which is a longing, very melancholy song, accentuated by the somber electric piano.  This is a beautiful piece of music, excellently arranged and played.  The electric guitar is very good.

“Heels of the Wind” (John, Taupin) – 3:35  A bouncy piano song with a dirty electric guitar, lots of voices on the chorus.  Dee Murray and Nigel Olsson of the old band play on this song, which sounds like it could have been recorded back in the old days.

“Elton’s Song” (John, Tom Robinson) – 3:02*  A mournful love song.  Mostly Elton with piano and synthesized strings.  One of the better songs on the album.

“The Fox” (John, Taupin) – 5:20  I would say this is an average song, it is certainly not a single, but it sails along smoothly.