The 1970s were Neil Young’s most successful and rewarding decade (in my opinion).  At the time, I thought he was quite eclectic, but then came the 1980s and the Shocking Pinks (rockabilly), Old Wave (country) and Trans (electronic).  The 1970s were diverse, but nowhere near the craziness that Neil would bring us in the following decade.

American Stars ‘N Bars was released in 1977 and I was immediately befuddled by it.  I don’t know what I expected, maybe another Harvest or After the Gold Rush, but this was not remotely close to those albums.  In fact, later, Neil Young admitted to not liking the commerciality of either of those albums.  Too mainstream for him. Mainstream make him uncomfortable, so he quickly changed directions.

American Stars ‘N Bars pulls songs from various sessions over a four year period (1974-1977).  Does the album sound disjointed? Yes.  The styles do not blend together well, in my opinion, it feels like it was time to release an album so he used songs he liked, not songs that belonged together. In fairness, he recorded the songs on side one all at the same time, so the vibe on that side is similar.  Neil was recording non-stop in those days, solo, with Crazy Horse, with Stephen Stills, and with various combinations of players along the way from Nashville to L.A.

During the period in which the songs from this album were recorded, Neil worked on a variety of other albums, representing different styles, tones and musicians: On the Beach (1974), Tonight’s the Night (1975), Zuma (1975), Long May You Run (1976), Decade (1977), Comes a Time (1978).  Neil Young is known to switch gears and pivot in a nanosecond.  Several times, he arranged albums for release, only to cancel them.  Chrome Dreams and Homegrown are two examples. Ironically, Homegrown is being released this week. While he might abandon a project, he keeps everything. His archives are extensive.

The first listen of American Stars ‘N Bars was disappointing.  The first side was full of country music.  At the time, country music was like fingernails down the chalkboard to me.  These were not bad songs, just not what I expected to hear.  Sure, Neil had indulged in a country song or two across his previous albums, but this was going into the deep end of the pool.  Was the entire album these country-waltz songs? God help us. His Tonight’s the Night, which has booze-drenched country rockers, was far superior most of his country songs here. It took me several decades to like that album, but eventually I found the soul and better understood the songs.  Like I would learn do with the country songs on American Stars ‘N Bars.

The songs on side one were all recorded from recent April 1977 sessions.  Crazy Horse is the band, supplemented by Linda Ronstadt and Nicolette Larson.

“Saddle Up the Palomino”  written by Neil Young, Tim Drummond, Bobby Charles. Nice guitar work, not a bad song, of infidelity and food.

“Hey Babe” Perhaps the best and most accessible song on the first side. It has a light and bouncy feel, and terrific vocals.

“Hold Back the Tears”  A Bob Dylan type song from the 1970s, something his Rolling Thunder Revue would have performed, with fiddle and female backing vocals.

“Bite the Bullet” This is a raw, terse song, with heavy guitar, very typical Crazy Horse fare. It’s an average song, repetitive and not necessarily plowing any interesting ground.

I made it through the first side and hoped for something a bit more rock and roll on the flip side.  “Star of Bethlehem” was the first song, a bit folk and country, a song that could have fit comfortably on Harvest.  It has a shuffle-beat and a dobro, countrified, but not terrible.  Emmylou Harris sings harmony, that’s a plus.  Neil also uncorks some nice harmonica and his acoustic guitar picking is a great touch.

The next song, “Will to Love” might be my all-time favorite Neil Young song.  It is simply gorgeous.  It is a gentle acoustic-based song, with Neil playing all of the instruments and vocals.  It is a sprawling seven minute allegory, a poetic tale of a fish navigating his way along the stream, past hungry bears, harpoons, shallows, on his way to meet his mate. Powered by the will to love.  Silly? No, it is a beautiful song of fish imagery that any man who has been on a primal, emotional search can relate.  Neil’s guitar moves the song along, with bass, piano, vibraphone, glockenspiel, synthesizer, percussion and electric guitar moving in and out of the song’s long journey.

Neil is an amazing lyricist, able to succinctly paint unique images in words. He might not approach the depth and insight of Dylan, but he’s close, when he wants to be. Listen to Harvest or his work in Buffalo Springfield or Rust Never Sleeps.

It has often been my dream
To live with one who wasn’t there
Like an ocean fish who swam upstream
Through nets, by hooks, and hungry bears

And now my fins are in the air
And my belly’s scraping on the rocks
I still think someone really cares
And I’ll keep swimming till I stop, no

It keeps my gills from getting dry
But it distorts things in my eyes
Sometimes I see what really isn’t there
Like my true lover, and I care

I remember the ocean from where I came
Just one of millions, all the same
But somewhere, someone calls my name
I’m a harpoon dodger, and I can’t, won’t be tamed

Baby, if I see boredom in your eyes
I’ll know my river has run dry
But I won’t turn back with that lonely tide
I bought that ticket and I’ll take that ride

If we meet along the way
Please sway beside me, let us sway ‘gether
Our tails together and our fins and mind
We’ll leave this water and let our scales shine 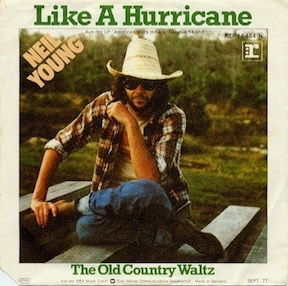 “Like a Hurricane” is one of Neil’s most famous electric songs.  Recorded with his sometimes band, Crazy Horse, it is a glorious eight minutes of guitar grit by Neil.  It rocks outs as the velocity of the string synthesizer gains more power and Neil lets loose sparks from his guitar.  Eight minutes is a long time to hold your interest, but Neil mixes the lyrical sections with his guitar work.

These two songs are worth the price of the album, flips sides of Neil’s poetic consciousness and his musical mastery.

The album closes with “Homegrown” from 1975 with Crazy Horse.  It is back to country, with an electric but ragged groove.  Honestly, not one of his better songs.  With Crazy Horse, Neil had his bar band.

I like the whole album better today, than when I brought it home back in 1977 and put it on the turntable.  While this is not the go-to Neil Young album I will pull out of my collection, I am always up to hear “Like a Hurricane” or “Will to Love.”   I have even learned to like the other songs, not as much as the others, but I am more accepting of his detour into countrified songs.  Neil is always an enigma to me, I have stopped trying to figure him out or understand his constantly shifting musical direction.

I am looking forward to Homegrown, to hear the what he originally envisioned to release prior to Comes a Time.  Two songs that appear on American Stars ‘N Bars, “Homegrown” and “Star of Bethlehem” are included on Homegrown, although they could be different versions.  I had not listened to “Will to Love” other than a couple of times in the past several years.  For me, that song is as expansive and rewarding as “Broken Arrow” or “Expecting to Fly.”