A broken-down cargo plane crashes in the Sahara Desert from a sand storm. Without a working radio, and limited supplies of food and water, a group of men are faced with certain death as they are stranded in the desert.

Water for 10 days.  The storm pushed them off course.  Someone has to take charge, to come up with a plan, and to keep their spirits from crashing.  Several passengers died in the crash and one man is seriously injured, hanging onto life.  Tempers immediately flare, and the fragile sanity of some begins to crack.

A British Army Captain, who was tagging along for a ride, decides that he and his sergeant will go looking for help, an almost certain suicidal mission, given the great distance and uncertainty of where they are.

An overlooked gem, one of James Stewart’s best character roles. The film is filled with veteran actors in what was one of the first action films of international stars. This format of packing an action story with a variety of actors known around the world would become a film studio marketing concept. Familiar names help to sell a film in foreign markets. 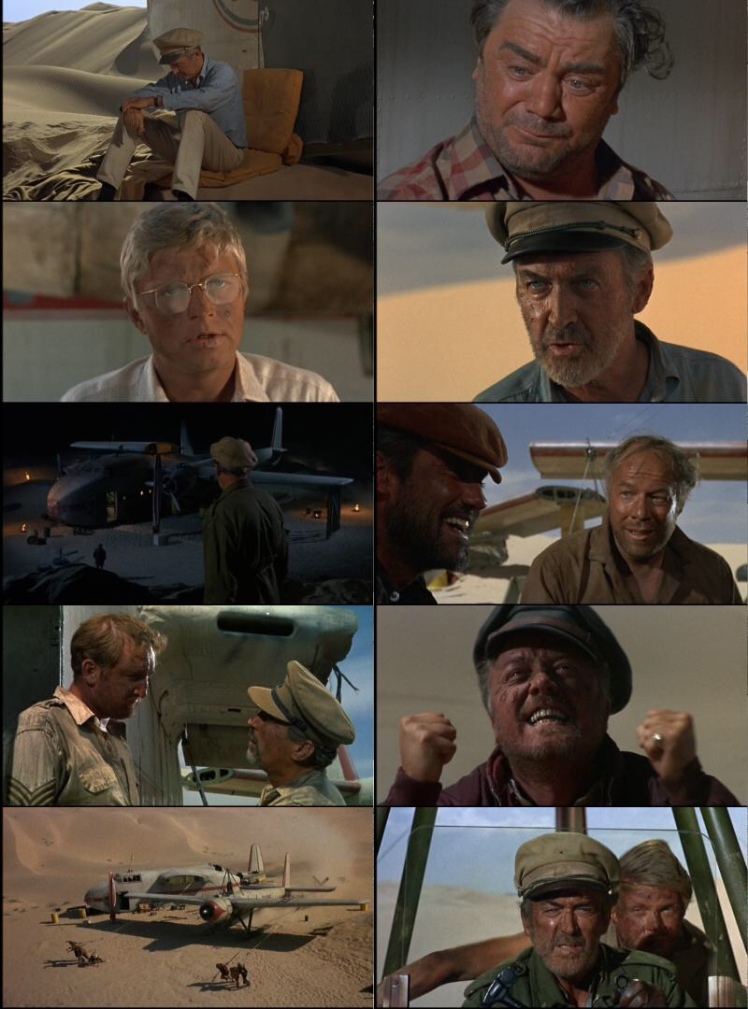 Joining James Stewart, George Kennedy was Ernest Borgnine for the American market, Peter Finch, Ian Bannon, Dan Duryea, and Richard Attenborough for the British Empire, Christian Marquand for the French cinema and Horst Bucholz for the European market. There were no women in the film which hurt the marketability. 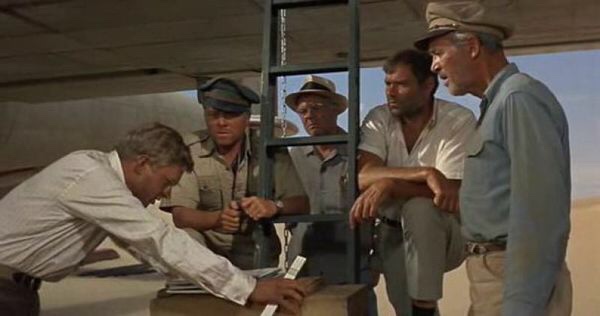 This is a very fine, but downbeat action story that failed at the box office. Still, it was remade in 2004, but fared no better.

The film is basically a tale of an airplane that crashes in the Sahara Desert. These are mainly oilfield workers, who are faced with survival in a hostile territory.

Their one, foolish hope, is to trust a megalomaniac toy plane designer, who designs a way to turn their wrecked plane into a craft to fly them to safety.

The film is good at contrasting the egos and power shift that happens as the survivors gain a grain of hope that the plan may work. All god while, they are battling the intense desert heat, lack of adequate food and water, and the threat of marauding scavengers who have already killed two of the survivors.

The film’s pace is very much a race against time. Director Robert Aldrich does s fine job of ratcheting up the tension as the survivors are fighting against exhaustion, internal conflicts and external threats. The dismantling and rebuilding of the plane is all done by hand, with a few tools and the aid of wenches to move a heavy wing across the fuselage.

Stewart, who’s career was in transition during the 1960s, is a frazzled and stubborn pilot, who feels responsibility for the crash, but also is reluctant to turn over control to the egotistical toy plane designer.  Stewart, a bomber pilot in World War II, was a good choice for the world weary oil company cargo pilot.  The cargo plane is a flying junkyard of controls and things that do not work, including the radio.

This film works on many levels. First, you do not know which character will die, if could be a marquee name. Second, there is a constant shifting of power in the film, as tension builds and survival seems more of a long shot. Third, there are some marvelous performances, this not a glamorous film, and there is competition for screen time. The ending seems fanciful, but is plausible enough to be realistic. The plan depends on being able to fire the last cartridge to start the engine, as a band of Arab raiders are closing in.

As a kid, I remember seeing this film at the drive-in, where I saw most first-run films in that era. That eight-year old was enthralled with the film. I soaked up every part of it. Jimmy Stewart might have been over the hill, but his crusty, sour personality only added to the friction of the characters. Stewart spend most of the 1950s playing broken, vindictive characters in contrast to Harvey. Stewart was one of the few Hollywood actors that grew from his World War II experience. His characters were mostly complex, often quick to violence and never giving an inch. His character here recognizes that he must control his anger and patronize the airplane designer for the benefit of the other survivors.

I am reminded of Twelve Angry Men, a much better film, but showing how a group of strangers, from vastly different backgrounds, must learn to work together and bridge their differences under very difficult circumstances.  The most compelling stories are those of when the human spirit is challenged, fractured and driven to near collapse, before finding a bead of sunlight to refresh itself and arch toward the sky again.