Westerns started making a comeback in the 1990s. The Quick and the Dead is one of my favorite Westerns. It has a bit of everything.

Ordinarily, I’m not a big Sharon Stone fan. Here, she’s tough and she’s vulnerable, often at the same time. In my opinion, it’s her best role, which allows her to showcase her strengths. <Insert jokes here> Credit director Sam Raimi, who adds visual wizardry to the film, but also keeps the story tight with a cast of actors who was like a band of Gypsies. 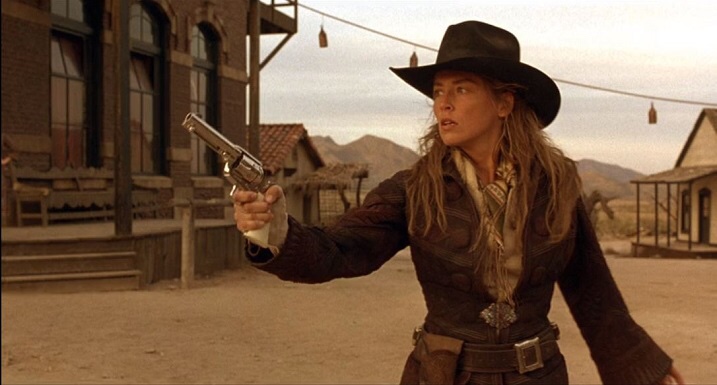 Stone shares the screen with Gene Hackman and Russell Crowe, two actors that can and do steal most every scene. A young Leonardo DiCaprio is close behind. The rest of the cast add their own quirkiness in this oddball film. Lance Henriksen, Tobin Bell, Kevin Conway, Pat Hingle and Keith David fill out the colorful cast.

When Westerns back in fad, producers knew they had to offer something different and bolder. Clint Eastwood’s Unforgiven drilled deeper in a conventional story with impressive results. The Quick and the Dead was a fresh take on a story of egomaniacal gunfighters out to prove who is best, in a series of gunfights to the end.

The story concerns a mysterious woman who shows up in town with some kind of weird backstory. She naturally draws interest from nearly every randy male with a six shooter.

The contest is sponsored by the rich man who owns the town and extorts money from the poor people under his thumb. A group of nasty cutthroats and self proclaimed shootists enter the contest. Stone’s character is known as the lady, and she gets entered into the contest after saving Crowe’s character Cort, from hanging. This draws the attention of Hackman’s character Herod, who comes sniffing around.

At first, each contest pairing is just to injure the other shooter, but Herod changes the rules and later it only ends when one shooter is dead.

Raimi tried to inject visual excitement wherever possible with his moving and POV camera shots. If you remember his Evil Dead and Army of Darkness films, he has an unconventional, but fun, visual style. The gunfights in particular are not gory because they are so exaggerated in style and execution.

There are multiple stories going on in the background, some involving Stone’s character, others Herod, Cort and DiCaprio’s the Kid. The contest is the plot device that brings these stories together.

You know that somehow, the lady, Herod, Cort and the Kid will all end up in battle, but who will be the winner?

Hackman would work another decade before retiring from films. At this point in his career, he had shifted to playing villainous or morally challenged characters, and Herod gave him a meaty role. It was reported that he and Raimi did not get along during filming. Whatever the case, Hackman turns in a delicious as the evil Herod.

Crowe really plays a supporting role, although he makes the most of his scenes. This was two years before L.A. Confidential, but his screen presence is undeniable.

DiCaprio had make a few big films, but hadn’t quite made the A-List yet. This film would help elevate his game.

This film lost money and had a roller coaster series of reviews. Still, it remains a very interesting film, even if you do not believe Stone in the role. There is a lot of crazy, offbeat fun in this film.  The Quick and the Dead does not look like other films, thanks to Raimi, and the characters do not behave like you would expect. I believe it was ahead of its time, and is difficult to categorize; audiences were not sure what to expect.  You are warned.