In 1970, Dave Mason released his first solo album, the revered Alone Together, after the first version of Traffic crashed. 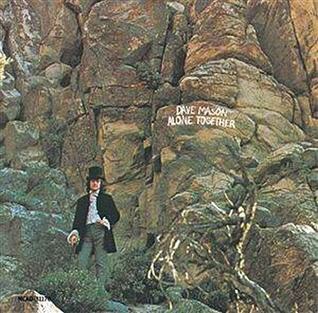 Mason moved to America where a lot of roots music originated. He settled in Southern California, hanging out with Stephen Stills, Eric Clapton, Cass Elliott and others where a new sound was developing. This led to being part of Delaney and Bonnie’s tour, which opened the door to his solo career.

Outside of Let It Flow, this would be Mason’s signature album. Mason’s most successful period was through the 1970s, cooling off as musical tastes changes, although always a popular concert artist.

Alone Together put Mason on the map as a solo performer. It had a pleasant laidback vibe, lots of guitars and more than a dash of the Sol Cal pop-rock influence. Mason said several of the songs were written in London, but the majority came after he moved to the L.A. area.

The album is a good listen from start to finish. The songs have a freshness and inviting sound. Three of the songs really stand out from the others. Mason has been performing these songs live over the past 50 years.

“Only You Know And I Know”

“Shouldn’t Have Took More Than You Gave”

“Look At You Look At Me”

The albums that followed Alone Together enjoyed mixed success. His second album for Columbia Records, Dave Mason, was nearly as strong as Alone Together, and then Let It Flow, which produced several moderately successful hits. Mason had drifted toward the mainstream, leaving behind much of his earlier originality and electric guitar prowess, as he was in search of pop chart success.

Now, fifty years later, Mason re-records Alone Together. It was a successful album but also a personal one. Mason would continue to perform some of those songs throughout his career.

So, why re-record it?

“The main reason I wanted to re-imagine this album was that I was never quite satisfied with how my vocals sounded. I like the songs and I like the performances but I was so young and it was my first solo album. The older I got the more the vocals bothered me and so I finally thought that I would sing the songs the way I first imagined them when I wrote them.” Mason said.

“The older I got the more the vocals bothered me and so I finally thought that I would sing the songs the way I first imagined them when I wrote them.”

Mason is not the first artist to re-record one of his classic albums.  Cat Stevens just did it with Tea For the Tillerman. Will this sell a few CDs to hardcore fans? It will, but for most folks who have the original albums, they will keep enjoying those.  The flip-side of tampering with one of your best known works is you also showcase your flaws – age.  I am withholding judgement until I hear Along Together, Again.

Coincidentally, Mason’s relationship with Eric Clapton from the Delaney and Bonnie tour led to his temporary membership in Derek and the Dominoes. Unfortunately, that did not work and Duane Allman joined up.