Someone says the economy is doing great. What does that mean? Who benefits? Who loses?

There are all kinds of people touting what makes a strong economy. Usually referred are jobs and the stock market. Trade surplus is another one. Wage growth. Interest rates. Gross Domestic Product. Consumer Price Index. All valuable to some degree.

To the average middle or working class America, you may have your eye on other numbers. Inflation. Taxes. Amount of your check left over at the end of the month.

Other indicators may be the price of milk or hamburger at the grocery store. Confidence in making a large consumer purchase. Your credit card balance. Whether you can help finance a child through college. Deciding to have that elective surgery. Postponing retirement.

There are other numbers that are not often discussed. Like the wealth gap. Or the number of people living within a couple of paychecks of eviction. How about those who have no health insurance, or can barely afford the  insurance they have. Those who are working more than one job, or those who have stopped looking for work, the permanently unemployed.

How many of you are invested in the stock market?  The Dow Jones or Nasdaq trade summary is probably the most quoted indicator.  According to a Gallop Poll from this year, 55 percent of Americans have some activity in the stock market, which is down from 65 percent in 2007. The more money you earn, the more likely you are to be invested in stocks. Only 14 percent invest in individual stocks, most participate in various funds that invest in a variety of financial products.

For many, we contribute money to retirement accounts, and skilled professionals invest the money for us.  When the stock market is down, I lose value.  I want the stock market to do well, but I’m not blind to other very important indicators, that for many Americans, are a better thermometer of the nation’s economic health.

Housing debt in the first quarter of 2020 was $10.15 trillion.  In 2008 it was $9.9 trillion and then fell steadily till 2013 when it started to rebound after the Great Recession.  Non housing debt is $4.12 trillion in 2020, which includes credit card, student loan, medical and car loans.  The trend of non housing debt follows the pattern of housing debt over the same period.

Of the non housing debt, in 2020, Americans had about $1 trillion dollars in credit card debt. Even with a pandemic, Americans did something unusual and paid down their credit card debt, reducing it below a more typical year.  Stimulus payments may have offset consumer spending, along with a more conservative approach given the uncertainty of the pandemic.

In 2018, Americans carried $88 billion in medical debt, and one in three had a GoFundMe account to help out. That is no longer the exception, it is now the norm.

Large company bankruptcies are up 120 percent over a year ago. Strangely, personal bankruptcy filing are down 12 percent over the same period.  Stimulus programs have aided both small and large businesses, but both have shed jobs.

Unemployment for August 2020 was 7.9 percent, up from 3.7 a year earlier.  That is 4.5 million people looking for work, as the number of unemployed who’s job loss became permanent, doubled, which did not happen during the Great Recession.  Earlier this year, millions were furloughed for various lengths of time, some have gone back to work, but for many, the cut is permanent.

During the pandemic, billionaires added $434 billion to their assets according to Forbes data.  This is the essence of the wealth gap.  As middle and lower earning households contend with stagnant wage growth, those in the upper tiers are accumulating a disproportionate share of the new wealth created in the country. 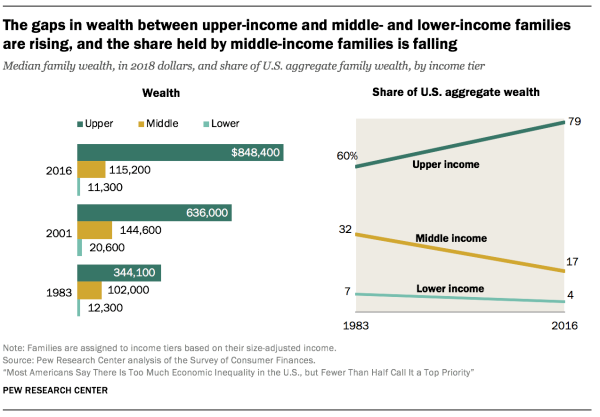 Gasoline is at a historic low, $1.99 per gallon.  What does that tell me?  Oil is cheap on the market right now.  Other commodities are are record highs, so the supply and demand for those is different.  I bought a new car and the interest rate would have been tempting if I had not paid cash.  As a consumer, and investor, I have to read a variety of signals and digest them.  The future is a scary place.  How do you plan for a pandemic? Or an illness that comes out of left field?  There are things you can do, based on what you know and your ability to plan, but you cannot see around the next corner.