Cary Grant, Tony Curtis and Blake Edwards in a comedy about a pink submarine. It’s silly, with a hint of sex, and darn enjoyable.

In the 1950s, it was challenging to mix adult fare with family entertainment and make it work. Operation Petticoat accomplishes it. Today, it seems rather tame, but at the time, mixing sailors and nurses in tight quarters was rather risqué.

The basic story revolves around a World War II submarine in the Pacific. Commanded by Grant, he takes on a junior officer, Curtis, who is unscrupulous and looking for a cushier war assignment. The two butt heads, but Grant’s captain finds a use for Curtis’ scrounging skills. The submarine is in need of a lot of work and barely stays afloat.

The submarine needs a paint job, and the only base paint they can find, when blended, emerges as pink. Until they can apply a more neutral gray, they must sail with an identifiable pink. This puts them at considerable risk of detection by the Japanese.

In the meantime, they have picked up a group of nurses, which makes for some interesting communal living arrangements. At first, they are only giving the nurses a lift to another island, but when that base is abandoned, they must keep the nurses aboard.  Naturally, there are budding relationships between some of the men and the nurses. 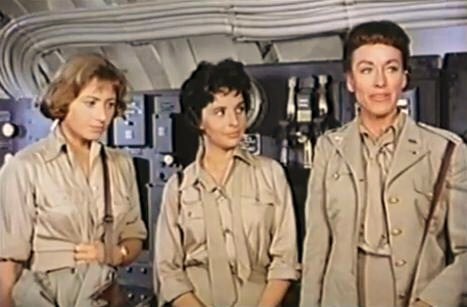 Curtis’ Lt. Holden, sets his sights on Dina Merrill’s character and pursues her with all of his charm. Holden plans to marry a heiress after the war, but in the meantime is open to some romance at sea. Merrill’s character falls for Holden, until he admits his post-war plans.

Arthur O’Connell is the chief of the engine room and hates women. The ranking nurse, Major Edna Heyward (Virginia Grey), tries to help him, but he wants no part of it. She’s mechanically inclined and helps him solve an engine problem whereby he gains new respect for her. She’s not a woman, she’s a mechanic.

Commander Sherman (Grant) locks horns with nurse Crandall (O’Brien), a well-meaning, but terribly accident prone person. Every effort results in calamity, and sometimes injury to Sherman. Of course you know, romance will ensue.

In the meantime, the ship picks up some civilians including a pregnant woman, and a goat. The submarine needs some repair parts, so Holden sets up a casino and accepts parts for gambling credit. On the way back to the ship they abscond with a farmer’s hog and smuggle it back onto the submarine. Unfortunately, MPs arrive with the farmer who extract some of Holden’s prize possessions as compensation. The crew dines on the hog for their holiday meal until a Japanese plane attacks.

Sherman comes up against a bigger problem than busty nurse Crandall. The Americans believe that the pink submarine may be a decoy, both the Japanese and US Navy are after them.

A destroyer spots the pink submarine and fires depth charges. The only way to convince the US Navy that they are not Japanese is to discharge ladies undergarments with their names, since an enemy submarine crew would have nothing of the sort. Fortunately, it works.

Service comedies were quite popular in the 1950s, especially when attractive women were mixed into hilarious situations.

Grant was at his career peak and negotiated part ownership of the film, which was a huge success. In 1977, a television series aired, co-starring Jamie Lee Curtis as one of the nurses.

Operation Petticoat is light fare, it does not pretend to be anything more than just a series of laughs.