In 1974, Atlantic Records released this strange album, a greatest hits collection that spanned only two albums and the A and B sides of a single. It was also a bit misleading because Neil Young only played on four of the songs. The group was reportedly not very happy about the release, but it proved to be a huge seller and was the only greatest hits collection of the four until years later.

So Far was the first album I purchased from any member or configuration of the group. I have written about the turbulent relations of the group in other blogs. In 1974, after several years going their own ways, the group reconnected for a massive 31 city tour of stadiums and large venues. So Far was released to help cash in on the tour success. Incidentally, a live collection of the 1974 tour would not be released until 2014, 40 years later.

After the tour, CSN&Y headed to Neil Young’s ranch to begin work on a follow-up to Deja Vu (1970), but guess what? Disagreements led to the project being cancelled, the first of several aborted efforts to record as a quartet.

I still have the vinyl version of this collection, but never bought the CD version, as I have versions of all the songs on the set.  The album cover is a drawing done by Joni Mitchell. 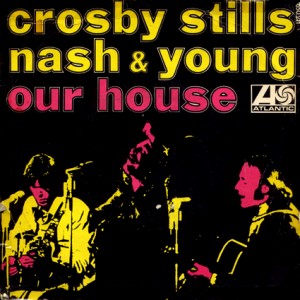 If you only purchase this set, you would miss some other marvelous tracks off the first two albums, and the awesome live album, 4-Way Street. It’s a good sampling of their work from a very specific era. If you want a broader selection, listen to all of the albums and buy the ones you like, plus any individual tracks.

This boxed set covers mainly CSN through 1991. There is very little Neil Young, just the material on So Far, but lots of CSN solo material and alternate versions. It is a good value.