The Western film was a big part of my early life. I formed much of what I believed about our country’s westward expansion and taming of the frontier from what I saw on the screen. We should not rely on learning history from Hollywood, but it was hard not to in those days. Films and television series exploited the Western genre. While much of what made the big and small screens was pure fiction or historical fiction, it was less about the facts and more about the dramatic conflict and folklore.

The West was barely settled when the first movies were created, and the genre was perfect for action, drama, good verses evil and even romance. The Western could be the backdrop for any sort of storytelling.  Story ideas from any place in history and any circumstance could easily be adapted to the Western theme.  There were many locations to film, most not far from Los Angeles, and soon Western towns were built that were constantly recycled by film and television productions.  The Western was a morality tale wrapped around a bit of action, which sets the drama in motion.  Westerns were generally internal conflicts expressed in gunfights, cattle drives, wagon trains and defending homesteads against attacks.

The Western was a visual genre and while the studio was helpful for interior work, where all the elements were controlled, the dusty outdoors was where the action took place.  As filmmakers quickly discovered, the Western landscape became a big part of the storytelling and often a character in the film. The desert, the hills, Monument Valley, the plains – locations were important visually and thematically to the story.

The first superheroes were cowboys.  Western stars were brave, honest, fast with a gun, great riders and ropers, and even sang a few songs.  Serials featuring reoccurring characters were quickly produced and played the theaters like episodes of a television series.  Studios cranked out B films quickly to fill the lesser part of the double-feature.

By the time I entered the world in the late 1950s, television was a huge part of middle America.  Studios were still cranking out a lot of films, but the serials went by the wayside as television took over filling that audience need with weekly series with reoccurring characters.  Television also became a source for old films that no longer had a home.  While television was a competitor of the films, all film studios created a television division to create content.

By the early 1960s, Westerns began to change, in part because audiences began to change.  The Western genre had been around since the early 1900s and had cycled through thousands of ideas, particularly once television starting producing Western series with nearly 40 episodes annually.  The demand for content was staggering, as was visual originality. 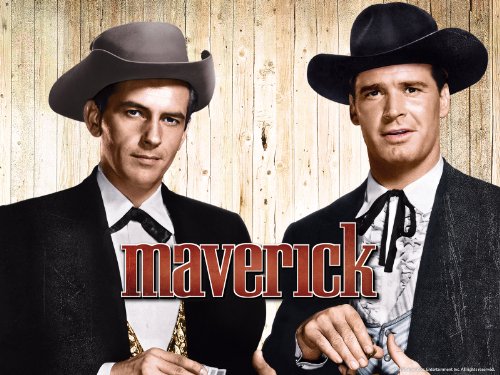 Audiences had seen everything. So the attitude of the Western began to change.  Warner Bros. television had premiered Maverick in 1957 with James Garner and Jack Kelly in the lead roles as the brothers Maverick.  This was a comedy Western with the focus on cunning and flimflam rather than action.  Western heroes were usually brave and free with their fists; Garner’s Brett Maverick wasn’t a coward, but if he could easily avoid a fight, he did.  Maverick showed that heroes did not have to always lead with a gun if they could outsmart their opponent. Maverick was also an “adult Western” with the humor more sophisticated and satirical.  Maverick raised the bar.

Another sign of change came with the James Stewart 1950s Westerns, a more psychological focus on the hero who struggles and raging emotions of hurt and revenge. Stewart made a series of films that contrasted with his warm, folksy film persona that was closer to George Bailey of It’s a Wonderful Life.  These were Western noir films, with brooding, damaged protagonists.

The other film that changed the genre was Sam Peckinpah’s Ride the High Country, a story of two old cowboys hired to transport gold from a mining camp to the town.  It is dangerous and offers plenty of challenge, including rescuing a girl from her drunken fiancé. Along the way, one of the cowboys decides to steal the gold, but the other one won’t go along.  This sets up a moral battle amongst them and a realization that heroes can go bad, at least until the final film conflict, when they can redeem themselves.  The film showed how the West had changed and the line between good and evil sometimes blurred.  Randolph Scott and Joel McCrae played the aging cowboys with one last chance at their legacies.

Sixty years later, the Western has been replaced by science fiction.  Star Trek was the “wagon train to the stars” as creator Gene Roddenberry had pitched it.  Science fiction and fantasy now have the superheroes and popularity that Westerns once enjoyed.  In much the same way, any story can be adapted to these genres, along with cutting edge computer graphics.

All of those old TV and film Westerns live forever on the oldies channels like Grit or MeTV.