Actor Ben Gazzara was a hotshot young actor in the 1950s, who made his name on the Broadway stage. An actor’s actor, he turned down films as beneath him artistically, but gradually accepted some roles. Anatomy of a Murder was many people’s introduction to Gazzara’s serious persona.

In the early 1960s, he had featured roles in a variety of films, some of them made in Italy.

He also found a home on television, in guest starring roles, the television films and eventually series, the most memorable being the drama Run For Your Life. He played a man with a terminal illness having only two years left to live.  He had the means to travel the world, cramming a lifetime into a few years.

Being a leading man in film never really panned out, although he was a busy working actor.  Into the 1970s, he returned to the stage, worked in television and the odd film.  He made several films with friend actor/director John Cassavetes, and even directed some television, including two episodes of Columbo.  Gazzara, Peter Falk and Cassavetes starred in Cassavetes’ film Husbands. The film, praised for its frankness and look inside the male psyche, is not everyone’s cup of tea.  I found it painful to watch, perhaps I had a problem with the excessive behavior, the improvised acting, or just not connecting with the subject matter.

Gazzara continued his work in television films and some low profile films until 1979, when he was cast by director Peter Bogdanovich in Saint Jack, based on the book by Paul Theroux. This proved to be a pivotal film in Gazzara’s career.  The film also helped Bogdanovich, whose brilliant label in Hollywood was not quite so luminous by the late 1970s, after several big misfires.  His last directed film was three years earlier.  Saint Jack was not a megahit, but it was a change-of-pace, unpretentious and based on a really good book. 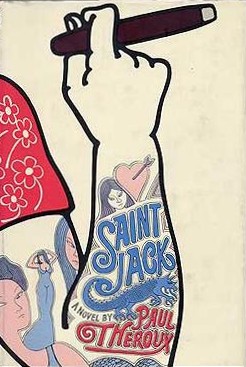 I have read several of Theroux’s novels including Saint Jack.  Having served in the Peace Corps, Theroux writes of the world he knows, or at least convincingly he takes us to interesting parts of the world, and off-beat characters.  His book, Doctor Slaughter, which was made into a film as Half-Moon Street, I thought was somewhat distasteful (yes, even I have a taste threshold).  I have not read Theroux since, but I am thinking of revisiting his works. 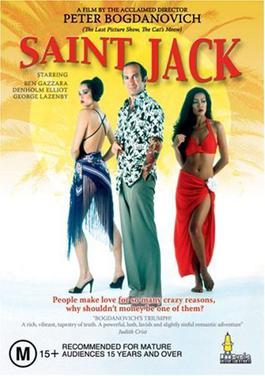 Saint Jack is the story of expatriate Jack Flowers, who is a pimp in Singapore in the early 1970s.  The prostitution trade is a competitive and dangerous one, there are bigger forces out there than Jack, who tries to navigate these waters.  Jack treats his girls with respect and genuinely watches out for them.  He takes care of them and seems to run a successful operation, maybe too successful. Calling Jack a saint is of course relative, he runs a dirty business, and people get hurt, but he has a sense of fairness.

Jack sets up his own brothel, but the Chinese Triad do not like the competition, and put Jack out of business.  He gets an opportunity by the American CIA to back his own operation if he can take some compromising photos, which he does. Singapore has been an R and R destination for American servicemen in Vietnam, even as the war winds down there is need for a recreational spot.  A rare attack of conscience causes Jack to abandon the plan and he destroys the photos.  He loses his opportunity, but is satisfied with his decision.

There is a subplot in the film, a friendship Jack develops with William Leigh, an auditor who annual reviews the books of the operation Jack works for. Leigh comes in an out of the film and dies near the end, and serves to remind Jack how far he’s drifted. He takes care of Leigh’s funeral and sends his ashes to Leigh’s wife in Hong Kong. Jack is supposed to collect his money for taking the photos and go back to America, but after he decides not to handover the pictures, he confronts his future, which is in Singapore.

The character of Jack is frequently compared to Humphrey Bogart in Casablanca, operating Rick’s, where people find refuge and where Rick eventually sheds his strictly business facade to help Elsa and her partner.  While Jack is not as disillusioned and world-weary as Rick, he does make money from vice and human weakness, and does what is necessary to survive in a harsh world.  Eventually, Jack, like Rick, looks into his soul and is not happy with what he sees.

Saint Jack is unlike other Bogdanovich films, but is closer to The Last Picture Show, than his early 1970s comedies. Like The Last Picture Show, Saint Jack is gritty, with subdued color, almost a documentary look with neo-realism reflective of European filmmakers like Fellini and Truffaut. Yet, the story is intriguing and Gazzara is in practically every minute of film.

Saint Jack does not rank with The Last Picture Show or What’s Up Doc?, but it close.  It is interesting that Saint Jack was produced by Roger Corman and his New World Pictures, and partially financed by Hugh Hefner.

After Saint Jack, Gazzara’s career was on the upswing. He starred with Audrey Hepburn in Sidney Sheldon’s Bloodlines, and a major role in Inchon, teamed again with Bogdanovich I They All Laughed, some television films and the lead in some international films. Maybe these weren’t A list feature films, but the these were starring roles.

Perhaps his biggest score was in a Patrick Swayze film, Road House. Gazzara played a local crime boss who tries to muscle the roadhouse bar the Swayze character is working at. This is a excessively stylish 1980s film, with a threadbare plot, over the top acting and total unavailability, and although it did lukewarm business and was savaged by critics, it turned into a cult favorite. It is one of the most popular film on cable. Although a cardboard character, Roadhouse gave Gazzara his most fame. Sad, really.

Gazzara played many confident characters with a swagger, who might erupt, but were often cool and in charge.  It is unfortunate that Gazzara never achieved the star status to match his talent.  He left behind a legacy of work that runs from Saint Jack and Anatomy of a Murder, to low budget films like Capone and Roadhouse. No matter the production, Gazzara brought his craft and talent.