Nanci Griffith passed away this week. She had been out of the new for a long time. Her last album release was in 2012. In January 2020, I wrote the blog below, so I thought I would reflect on it and push it back into the universe. Peace, Nanci.

With a voice, every bit as distinctive as Linda Ronstadt, Dolly Parton and Emmylou Harris, Nanci Griffith blended folk, country and pop into vignettes of struggle and joy. Griffith wrote most of her own songs, and was covered by many other artists, but also released albums of songs that influenced her. Mary Chapin Carpenter is similar in style, blending different genres seamlessly together. In the early 1970s, you would have called her a singer/songwriter, but in the 1980s and 1990s, that label was out of style. She produced her most widely known material, and enjoyed her greatest chart success, on the country and adult contemporary charts. Since 2013, she has been relatively inactive from the music scene, but for 35 years, she toured relentlessly and released a new album every two or three years. I met her once getting off her tour bus in Lawrence, Kansas. The first song I heard was “Love at the Five and Dime,” in 1986, before she signed with a major label. Her heartfelt, slice of life songs were already becoming known. Her Texas sensibility would relocate to Nashville, where artists like her were drawn. https://youtu.be/OQH3ijRCY-o In 1987, signed to MCA Records, she release Lone Star State of Mind. One might fear that on a big label with big expectations, that her intimate folk inspired songs would be overly commercialized and drained of their essence, she actually shines more brightly. “From a Distance,” might be the best known from the collection. The label had her cover six of the eleven songs. The covers are fine, but I prefer her own songs. 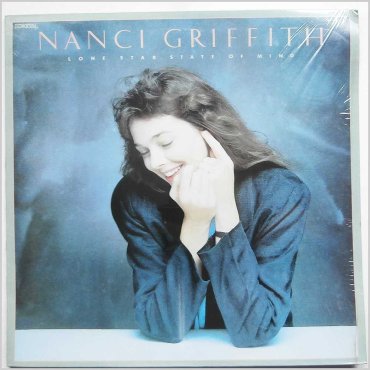 Her next album, Little Love Affairs, follows the same formula, a combination of her own songs and those from other writers. There is a bit more emphasis on the backing music, which was probably the label’s notion to get her more airplay. I believe her label began to see was that she would never be a million selling, mainstream country artist, but she would establish a loyal audience appreciating her unique vocal style and songs of real life. “I Knew Her” and “I Wish it Would Rain” were two of the standout tracks. https://youtu.be/a9lUG4gBjSE One Fair Summer Evening, also released in 1988, is a live album released of a performance at the Anderson Fair. Storms, released the next year, and produced by rock producer Glyn Johns (Beatles, Eagles, The Who, Ozark Mountain Daredevils), might have seemed a strange choice, but he have her a bit more commercial emphasis. It made a solid, but unspectacular showing on the country charts, and cracked the Billboard pop 100 chart. “I Don’t Want to Talk About Love” and “Drive-In Movies and Dashboard Lights” are terrific songs. https://youtu.be/t3HaYNUMXkA Late Night, Grand Hotel arrived in 1991, this one produced by Peter Van Hooke and Rod Argent. “Heaven” by Julie Gold, and “Late Night at the Grand Hotel” are shimmering and stylishly produced. Her albums pack plenty of production quality, and her songs, while having some of the necessary melodic hooks for radio, do not pander to the generic formula for popularity. https://youtu.be/ZvNgXryq6rM In 1993, Griffith changed labels, going to Electra for Other Voices, Other Rooms, an album of songs by other writers. Griffith sought to interpret songs that had influenced her life. The album made a decent showing on the pop charts and won 1994 Grammy Award for Best Contemporary Folk Album. The album includes songs by Bob Dylan, Townes Van Zandt, Gordon Lightfoot and Woody Guthrie.

Flyer, released in 1994, is more contemporary album, produced by Peter Buck (R.E.M.) and Peter Collins (Alice Cooper, Indigo Girls, Bon Jovi). Fourteen of fifteen songs were written or co-written by Griffith. The album was regarded as more focused, deeply personal, and production that enhanced rather than competed with her distinctive voice. A wide range of musicians helped on the album including members of U2, The Chieftains, Counting Crows, Bodeans and Mark Knopfler (Dire Straits). It was nominated for a Grammy. In 1997, Griffith teamed with rock producer Don Gehman (John Mellencamp, Hootie & the Blowfish) for an album in the style of contemporary pop/rock performers of the era. Blue Roses From the Moons, is a collection of originals and covers, was regarded as pleasant (how can her singing be anything else?) but not particularly memorable. There are better albums out there. https://youtu.be/F9V3o6-uqcs After this, I kind of lost track of her. She would move to a smaller label and seem to care less about radio play or catering to music industry expectations.