Laid Back (1973) is Gregg Allman’s first solo album outside of the Allman Brothers Band (ABB).  It was recorded during the band’s sessions for their fourth studio album, Brothers and Sisters.

It was a little unusual to be working on a solo project at the same time as recording a band album, but the Allman Brothers have never been quite by the book.  There were tensions within the band, primarily between Allman and guitarist Dickey Betts.  Allman and Betts always had a competitive rivalry, and after Duane Allman’s death, the leadership of the band was at stake.  Allman said that Betts stood up where as he sat down. “There was no power struggle,” he said.  It’s hard to be a front man when you are sitting behind an organ, he said in his autobiography.  If he had taken charge, the first thing he would have done is fired Betts.  But he didn’t, and the band soldiered on, for many years.

“Laid Back was my mistress,” Allman said.  “It didn’t make the other guys happy, because it slowed down the progress of Brothers and Sisters, but making that record was something I needed to do at that moment.”

Allman brought “Queen of Hearts” to the ABB’s sessions for Brothers and Sisters, but they wouldn’t even listen to it.  Allman was drunk at the time and the band refused to entertain listening to his song.  That very night, Allman found a recording studio and began work on Laid Back.

Brothers and Sisters would be more of Bett’s album, as Allman worked on his own album, and primarily due to Bett’s sterling songwriting which produced two of the band’s best known songs: “Ramblin’ Man” and “Jessica.”

Both Laid Back and Brothers and Sisters would be released in 1973, and the Allman Brothers would tour in support of their album.  Allman would tour in support of his own album as well. He hired a string orchestra to accompany his band on the road. An expensive tour, with the aid of a live recording from the tour he was able to turn a profit. He admitted the tour was inspired by the Joe Cocker Mad Dogs & Englishmen Tour. The 1970s, you had to be there.

Meanwhile, Laid Back was Allman’s effort to carve out his own identity and remove himself from the craziness of the Allman Brothers.  Half of the songs on the album were Allman’s, but he included four covers including what would become one of his signature songs, “These Days” by Jackson Browne.

To really appreciate this album, and Allman’s music, one needs to listen to the re-release of this album, the expanded 2019, two-disc version.  This is simply, Allman’s best and most complete recording.

Laid Back album has been unavailable for 30 years, and the expanded version is newly mastered, with great sound.  Interestingly, a few of the alternate versions and demos are in some ways even better than the original recordings. 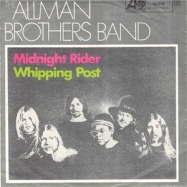 Allman intended to infuse a different vibe in this recording, mixing R&B and gospel influences.  He also sought to incorporate horns and strings where relevant to fill out the sound.  He used Johnny Sandlin, producer on early Allman Brothers records, to co-produce, but not imitate the ABB sound.

The first example of Allman’s efforts at a somewhat different sound began with his re-recording of “Midnight Rider” which had been recorded for the ABB’s album Idlewild South in 1970.  Allman re-imagined the song and gave it a fuller production, creating new life for the song.

“I told Johnny (Standlin) I wanted it to sound real swampy, with the image of moss hanging off the trees, alligators and fog, darkness, witches and shit,” Allman said.

What’s interesting about this album is the intimate sound, even though Allman and Sandlin ramp up the production at times.  It is plaintive, soulful and emotionally deeper than much of the ABB work up to that point.  While the ABB could tear a hole in you with their instrumental power and precision, Allman did it here with the bare emotion of his voice.

LAID BACK DELUXE EDITION TRACK LIST (with my comments)
CD1
LAID BACK remastered
1. Midnight Rider – Better than the ABB version, haunting and primal.
2. Queen Of Hearts – Rejected by the ABB, it is jazzy and soulful, a beautiful horn arrangement.
3. Please Call Home – A beautiful mix of organ and piano, with a gospel choir, strings and horns, it is a hidden gem on the album.  Allman stretches his vocals in soulful excellence.
4. Don’t Mess Up A Good Thing – A boogie woogie tune with a driving piano and drums, and a very jazzy sax.  Not something you would have heard on an ABB album.
5. These Days – Many have recorded this song by Jackson Browne (including Browne himself). Allman’s and Glen Campbell’s versions are the best.  Allman’s is best known and he gives meaning to the sad, reflective lyrics of coming to terms with life.
6. Multi-Colored Lady – An acoustic flavored love song, great mix of piano and acoustic guitar with string accompaniment.  A somewhat delicate song, particularly with the strings, ABB would have put an entirely different vibe to it.
7. All My Friends – Written by Scott Boyer, another gentle ballad with a fine arrangment supplementing the acoustic guitars and piano, with strings and double tracked vocals.  The guitar solo is awesome.
8. Will The Circle Be Unbroken – A frequently recorded traditional song.  Allman’s version is no better or less than other versions, but his is very personal.  Nice piano work.

CD2
LAID BACK demos, outtakes & alternates
1. Never Knew How Much (Demo)** – Early version of a song released in 1981 by the ABB. Basic production, but highly effective.  Great song.
2. All My Friends (Demo) – This basic arrangement works, not as polished or rousing as the fuller original, but the power of the song comes through.
3. Please Call Home (Demo)* – Like the songs above, basic instrumentation without the choir and orchestra, but a nice version none the less.
4. Queen Of Hearts (Demo)* – Allman proves that a stripped down version can retain the awesomeness of a song that shines with a bigger production.
5. God Rest His Soul (Solo Guitar & Vocal Demo) – Written for Martin Luther King.  Just Allman and his guitar.
6. Rollin’ Stone (Catfish Blues) (Solo Guitar & Vocal Demo)**  Muddy Waters tune.  Just Allman and guitar.
7. Will The Circle Be Unbroken (Solo Guitar & Vocal Demo) – An acoustic solo version.
8. Multi-Colored Lady (Solo Guitar & Vocal Demo) – The early bare version.
9. These Days (Solo Guitar, Piano & Vocal Demo)* – This is actually a nice version.  A different vocal approach to the song.
10. Shadow Dream Song (Solo Guitar & Vocal Demo) – Written by Jackson Browne, a song that would show up on a later album.  Sounds eerily like “These Days.”
11. Wasted Words** – An early version of the song that would end up on Brothers and Sisters.  This version included Johnny Winter.
12. These Days (Alternate Version with Pedal Steel Guitar) – A slightly country version, okay, not great.
13. Multi-Colored Lady (Rough Mix)* – An okay version, lacks the exuberance of the original version.  This feels like a tentative, working version.
14. These Days (Rough Mix)* – A version not too different from the original.
15. God Rest His Soul (Rehearsal) – A full version of the MLK inspired song, a working version.
16. Midnight Rider (Rehearsal)* – A working version without the ornamentation of the released version.
17. Song For Adam / Shadow Dream Song (Solo Guitar & Vocal Demo) – A song written by Jackson Browne along with an Allman song.  The last song on Allman’s last album was “Shadow Dream Song.”
18. Melissa (Live at the Capitol Theatre)* – Allman solo in concert.

Laid Back reached number 13 on the charts and sold in excess of a half a million copies (Gold Award).  Brothers and Sisters topped the chart and sold nearly twice the number of albums.  There’s no doubt that Brothers and Sisters is a fine album, one of ABB’s best.  Laid Back is a superbly crafted album, from start to finish, it has a poignancy that reflects the melting pot of musical styles in the early 1970s.  Allman took a big chance, deviating from the very popular Southern vibe of the ABB to go deeper in the American musical psyche.

Listening the alternative versions, rough mixes and demos belies the evolution of these songs, in structure and musical style. Allman was greatly aided by a core group of musicians on this album including Chuck Leavell, who had most recently played with Dr. John.  Leavell soon became part of the ABB, providing the chords and fills to what amounted to a second guitar, even though he played keyboards.  Leavell could provide the gospel, R&B and swampy style that runs through Laid Back. When the ABB broke up in 1976, Leavell and several other band members formed Sea Level, a progressive-rock band.  When that band ended, Leavell established himself as the Rolling Stones keyboardist, a position that he still fills today.

After Laid Back and Brothers and Sisters, Allman and ABB entered a difficult period. Allman released a live album of his tour and ABB released Win, Lose or Draw, generally considered to be the nadir of their catalog.  Drug and personal issues took its toll on relationships and the band broke up, with everyone forming new bands.