The 1976 concert film from Led Zeppelin played on Turner Classic Movies as part of a series of music-related films.

I enjoy the live album from the film more than the actual film. The concert footage was filmed over several nights at Madison Square Garden in July 1973, with the fantasy sequences added later. Additional concert filming was done at Shepperton Studios in England to subsidize the MSG footage.

It’s a rather bizarre film. A snapshot of rock and roll excess in every respect, but an accurate portrayal of a high profile rock band whose success was on an endless skyward trajectory.

This was rock and roll in the early 1970s: big, loud, excessive and sensory busting. Outside of The Rolling Stones, Led Zeppelin was the biggest concert act on the planet. They didn’t need hit singles to move millions of albums or sell out huge venues.

In the film you see the big airplane they traveled in and the fleet of limousines once they landed. They did everything first class, including the drugs and after concert debouchery, but that’s another story.

The film’s fantasy sequences do not relate to the music, but rather are a look inside the lives and imagination of individual band members. Even their heavy-handed manager Peter Grant gets his time in the spotlight.

Grant was a loud, foul bully, who wrangled some incredible deals for the band. Give him credit for putting his soul into the band and making them wealthy and famous. He was known for his strong armed actions and these are well represented in the film, including berating merchandise sellers and an investigation into the theft of band’s money from a hotel safe.

By this time, guitarist Jimmy Page’s fascination with black magic and the occult were part of the band’s music, album art, onstage look, and the band’s growing mystique. With growing success, the band disappeared behind a wall of their generated publicity, restricted access, and carefully massaged imagery. The band worked tirelessly to become known, now they carefully controlled feeding the public’s appetite.

Watching the film, the band put on incredible performances, giving fans hours of playing, and unleashed almost indistinguishable versions of their songs. These guys could jam. What I always disliked about bands like The Who and Led Zeppelin were their limited musical ability to recreate their recordings live. At least The Who began to employ a keyboardist on tour to provide the keyboard treatments. Zeppelin used a keyboard, played by bassist John Paul Jones, who also played bass pedals, but their sound always seemed thin. Try as he might, Page could not manufacture all of the layered guitar parts on the recording.

While the performances in the film are generally impressive, they aren’t always great. They are long and meander. These performances were filmed toward the end of their tour. Back in those days, there was minor sweetening of live performances on albums, unlike the wholesale fixing that is now standard.

Songs like “Stairway to Heaven” and “No Quarter” are passable, but lack the polish that brought distinction and beauty to the recordings. “Stairway” is saved by a long and credible solo by Page, much more aggressive than the recording. “The Rain Song” captures the melancholy of the original.

“Dazed and Confused” and “Whole Lotta Live” have moments but stray too far afield. “Rock and Roll” and “Celebration Day” are better.

“Moby Dick” serves up a repetitious riff and elongated drum solo by John Bonham. In the 1970s, every concert had a required drum solo. Bonham is a premier drummer, but it’s not a great performance. Excess leads to tedium. The film cuts segments of Bonham driving his sports cars, motorcycle and playing pool. Snooze. 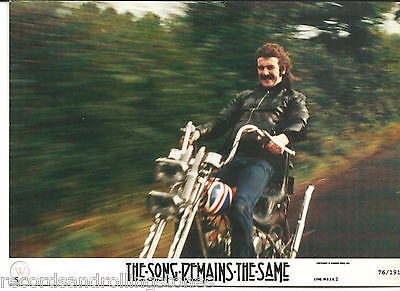 Led Zeppelin owned the first half of the 1970s. The second half they coasted and suffered misfortune. The material they played in this concert film represented some of the premier hard rock of the era. They worked hard and played hard, the film gave you a glimpse into both. The film provides a historical document of a weirdly special time in rock music.

If you enjoy Led Zeppelin and the garishness of the era, this film is worth viewing. The original song versions are wonderful, even if most of these versions are not. Remember, this is 47 years ago, so approach it with that mindset.

One thought on “The Song Remains the Same”