In four decades, Tim Allen has appeared in two long-running television series and a slew of films.

Allen has a lot of fans, deservedly so. Home Improvement, until the later seasons, and three of his films (not counting the Toy Story films) are the best of his work. When he was trying to be edgy, instead of appealing to grandmas and kids, you saw him step out on the ledge, be a little vulnerable and more of a realistic character.

Galaxy Quest, Joe Somebody and Big Trouble are really good films. Allen is surrounded by very good casts and usually experienced filmmakers.  Allen does not have to act silly and mug for the camera (well, as much). He can settle into characters and set the stories flow.

I like Tim Allen; most men can relate to his overcooked manliness and bluster, and appreciate him humbly licking his wounds. He’s a lovable goof, but it’s nice to see him play three-dimensional people.

I sometimes thought Allen could become Jack Lemmon, if he’d wanted too, and sacrifice some big paychecks to become a better actor.

Galaxy Quest (1999) is a fun journey that blurs the lines between reality and a long-passed television series.

Allen plays actor Jason Nesmith, the commander of a starship on a television series called Galaxy Quest, thinly patterned after Star Trek. Nesmith is an insensitive, egocentric actor, despised by his fellow actors on the series, who see each other at conventions and store openings.  They are has-beens.

The film centers on a group of aliens (Thermians) who have traveled to Earth to enlist the help of the Galaxy Quest actors to save them from the evil Sarris and his forces.  The Thermians believe the Galaxy Quest episodes were historical documents, not a television show.

Nesmith and crew travel with the Thermians back to their spaceship, a replica of Galaxy Quest’s Protector, to figure out how to defeat Sarris.  Along the way, each of the actors has to step into character to assist the Thermians, as if they are skilled in the function of their character of the show. Although the truth is eventually learned by the disappointed Thermians, Nesmith and crew are able to help defeat Sarris and land their spacecraft at a Galaxy Quest convention.  Nesmith must enlist the help of teenage fans who know the Galaxy Quest ship Protector, even better than the actors, to learn the real thing. How’s that for irony.

Director Dean Parisot was brought in after original director Harold Ramis departed over creative differences, including wanting someone other than Allen. Parisot saw the film as a drama that happened to be funny, not a slapstick comedy. The humor and warmth of the characters elevates this film, as does the script which is laden with smart dialogue and quirky characterization that becomes more apparent the more times you see the film. 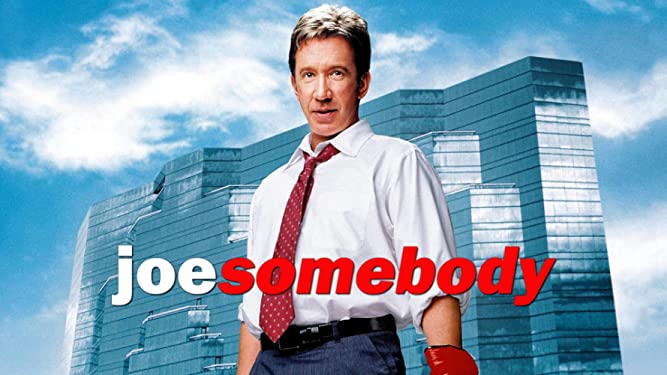 Joe Somebody (2001) Allen is Joe Scheffer, a nice guy, schmo, who always gets the fuzzy end of the sucker.  His wife divorced him because he was boring and she wanted to be an actor; he has been passed over for promotion; he is invisible at work; has no real life; and gets bitch-slapped in front of his daughter in the parking lot of his work, over a parking space. 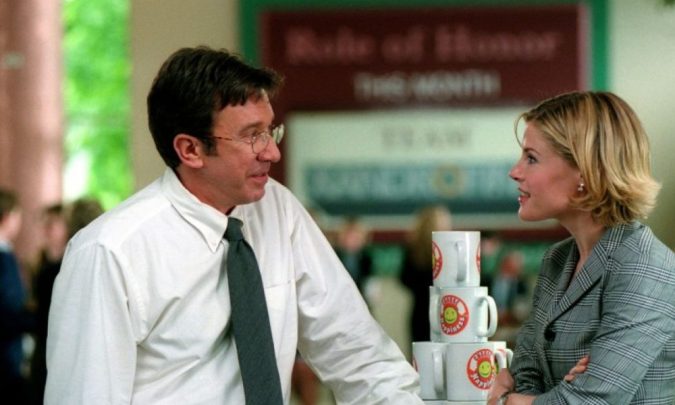 Feeling like a loser, he stays away from work, his daughter, and holes up drinking and cleaning his house.  The wellness coordinator, Meg, from the large pharmaceutical company where he works and who saw something warm and real in Joe, is told to go to his home and convince him to come back to work.  Joe is figures out that he must fight the guy who slapped him in order to get back his dignity.  This decision makes Joe a popular guy and suddenly he is somebody, except to Meg, and his daughter.  The rest of the film is Joe trying to get ready for the fight, by learning self-defense from the Jim Belushi character.  Joe gets promoted, is invited to the executive exercise club, offered a courtside seat at the NBA game, hangs with the popular employees, and even gains back the attention of his ex-wife. Joe is caught up in the sudden popularity, losing his chance with Meg and frightening his daughter.  What Joe discovers is his confidence and sense of self, which he never really had to begin with.

The film includes some satire on the pharmaceutical industry, having drugs to make you better than you are, but with a lengthy list of disclaimers.  Joe was on a high that was not him, it was phony and hid his best qualities.

Allen does mug for the camera in places, which is not necessary, but those are cheap laughs.  The best parts of the film are when he acts straight and gets into character.  The script is solid enough to make its points and Allen is funny enough in character to deliver. Besides Belushi, Julie Bowen, Kelly Lynch, Greg Germann, Hayden Panettiere and Patrick Warburton.

Big Trouble (2002) is based on the book by humorist Dave Barry, and directed by Barry Sonnenfeld (Men in Black, Wild Wild West, Addams Family).  The film has a large cast; this is really an ensemble film, with a complicated series of interconnected stories that all tie together in the third act.

There is nothing serious about this film and that is the way it should be.  I cannot understand why this film was overlooked: great source material, great director and awesome cast.  Maybe it was viewed as a lightweight, throwaway film.

The film centers around two assassins who arrive in Miami to take out someone embezzling from his company. At the same time, an advertising man’s son attempts to squirt the embezzler’s stepdaughter as part of a school game, interrupting the real assassination. This event leads to a suitcase with a nuclear bomb, two dumb robbers, two FBI agents, two police officers, a hippie, a housekeeper and Russian arms dealers. Allen’s narration helps to tie together the various plot threads.

Big Trouble is as goofy as Sonnenfeld’s Men in Black and Addams Family films. For some reason, this film was a commercial and critical misfire. For all the reasons this film appeals to me, it turned off audiences. Allen plays a similar character to Joe Somebody, a good-guy loser who finds his self-respect, the girl and the respect of his kid.